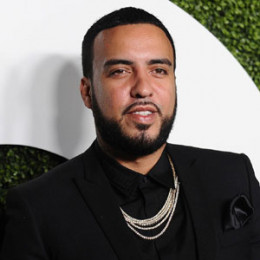 French Montana, a professional rapper and music producer is the well-recognized record artist who has contributed the music industry with his incredible work. As an established rapper and owner of Cocaine City Records, he has added millions of dollars to his wealth.

Who is French Montana Dating at Present?

French Montana, the 35-year-old is single as of now but it doesn't mean he is no more in contact with his son. The NCIS: New Orleans star still has a good bond with his ex-wife Deen and their kid, Kurz. He frequently appears on Deen's Instagram spending quality time with his son.

The Moroccan-American rapper was married to his longtime girlfriend Deen Kharbouch. Prior to the wedding, Deen worked for the finance firm Vornado Realty Trust. The couple's intimate wedding ceremony was held in 2007.

They lived as a husband-wife for almost seven years. The duo was blessed with a son named Kurz in 2009. He divorced spouse, Deen, in 2014 after separating in 2012.

Since the rapper's divorce with an ex-partner, Kharbouch, he had an affair with many women including Sophia Body. Nonetheless, his relationship with Sophia could not last long.

Later then, he dated Trina in 2013 but broke up soon in 2014. In the same year, Montana was in a romantic relationship with Khloe Kardashian. They eventually broke up in 2015 after dating for a year.

French was shot in the head in 2002 while leaving the recording studio in New York. The chance of his living was very thin and he was under observation for a week. He fought death and survived.

What Is French Montana's Net worth?

Montana earns a huge amount from his career as a rapper, videographer, and entrepreneur. He has accumulated an estimated net worth of $8 million.

Montana charges $30,000 per night for a live performance. He is the owner of Coke Boys Records and Cocaine City Records.

Khloe Kardashian's ex resides in a lavish house in Calabasas, California worth $3.3 million. The mansion was formerly owned by singing sensation, Selena Gomez. In late 2014, Montana handled his spouse a $2 million settlement.

Montana began his career in his teens as a rapper. In 2002, he founded Cocaine City Records which featured interviews with rappers focusing on hip-hop beef and street music.

His first mixtape French Revolution Vol. 1 released in 2007. The album was his collaborated work with Uncle Murda, Jae Millz, Tony Yayo, and Mazaradi Fox. In 2013, he released his first solo single entitled Ain’t Worried About Nothin. His solo ranked number 4 on the Billboard 200 and was super hit on the radio stations.

His first underground hit is Straight Cash produced by J. Cardim. Likewise, he collaborated with renowned artists such as Max Beesly, Akon, and many others and has released several mixtapes.

His sophomore studio album Jungle Rules peaked at number 3 on the US Billboard 200. Unforgettable was the hit single of the album, featuring Swae Lee.

French Montana was born Karim Kharbouch on November 9, 1984, in Rabat, Morocco and grew up with his younger brother Zack on the family estate outside Casablanca.

During his childhood days, he had a keen interest in soccer, rap, and basketball. He is fluent in several languages, English, Arabic, and French. He went to Lehman and Roosevelt for his high school education.

Kurch Kharbouch is the only child of French Montana from his ex-wife Deen Kharbouch. He was born in 2009.