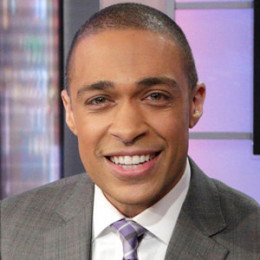 T.J Holmes is the television personality and correspondent of America working with the CNN presently. Holmes attended the University of Arkansas where he earned a degree in broadcast journalism. Holmes joined CNN in October of 2006 and claimed to fame with his work as an anchor and host in CNN. The anchor joined BET network and leaved CNN at the fall of 2011. Before his re union with CNN, he also served as the substitute host for MSNBC. He received the Young Alumni Award from the Arkansas Alumni Association at the University of Arkansas in 2007.

Moving towards his personal life, he is married to Marille Fiebig who is attorney of Atlanta. They have welcomed their first child as daughter. However, he was previously married to Amy Ferson and was divorced due to some personal dispute. He is the father of his teenage daughter Brianna Holmes from his first girlfriend whose name has never been disclosed. The additional information about him can be obtained from his Twitter account.

He is married to Marille Fiebig. Feibig is attorney of Atlanta. The couple tied their knot on March 1, 2010 in Tennessee. They are blessed with a daughter.

He was previously married to Amy Ferson. However due to some personal dispute they moved apart in the year 2007.

They welcomed their first child as daughter Sabine on January 2013.