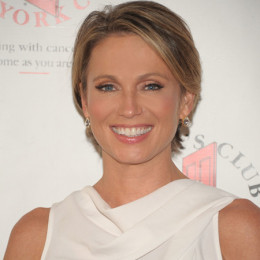 An American television journalist working for ABC News who is currently working as a News Anchor for Good Morning America. Previously, she was the national correspondent for NBC News. When she was young, she had a keen interest in Gymnast.

Amy Robach is happily married to Andrew Shue since 2010. Previously, she was married to  Tim McIntosh from 1996 until filing for an uncontested divorce in 2008. The duo shared two daughters; Ava (2002) and Analise (2006).

Amy Robach possesses an estimated net worth of $300k. The main source of her earning is from her career as a TV host. She earns a good sum of salary.

Amy Robach was born on February 6, 1973, in St. Joseph, MI, U.S. She was raised in Michigan before moved to Missouri. She graduated from Brookwood High School in Snellville.

Amy was the fourth runner up in 1995 Miss Georgia pageant as Miss Gwinnett County. She was also Nominated for a 2002 Regional Emmy in the category of "News Segments: General News/Delayed Air".

There is no exact information on when they got married . Together they are parents of two daughters. She filed uncontested divorce against him.

They first met each other at the book party in the prior April. They got married on the day of her 37th birthday. He is a father of three sons from his ex-wife.

She is very cute and adorable. She is the eldest daughter of the family.

She is very beautiful. Her picture along with her dad, sister and mum can be found in different sites.