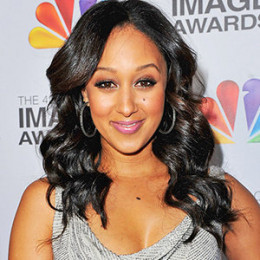 Tamera Mowry is an American actress and model, the daughter of Darlene Renee Mowry,a security guard, and Timothy John Mowry, who was in the U.S. Army at the time of her birth. She was born 2 minutes before her twin sister Tia Mowry. Tamera attended Birmingham High School in Van Nuys, California and attended Pepperdine University in California with her sister, Tia Mowry. She graduated from Pepperdine University majored in psychology, and spent summer 2001 studying abroad at Pepperdine's Italian campus in Florence. When the girls were just 16, they discovered tremendous success with their hit TV series, Sister, Sister (1994), about twins that are separated at birth who learn of each other and come back together in their teen years and it became a huge hit. After "Sister, Sister" ended in 1999, Tamera has been in many movies and shows such as Seventeen Again (2000), The Hot Chick (2002), Twitches (2005) and Double Wedding (2010) and many more.

Tamera Mowry dated his boyfriend for almost 6 years and married on May 15 in 2011 at California's Napa Valley.The couple welcomed their first baby boy on November 12 , 2012 and  named Aden John Tanner Housley.

On July 1 , 2015 she gave birth to a baby girl named Ariah Talea Housley. Tamera is a perfect mother for her children.

Tamera Mowry is married to Fox News Correspondent Adam Housley on May 15 2011. The couple had been dating for almost 6 years. They welcomed their 1st child , a babyboy Aden John Tanner Housley, on November 12, 2012 and next child , a baby girl Ariah Talea Housley on July 1, 2015.