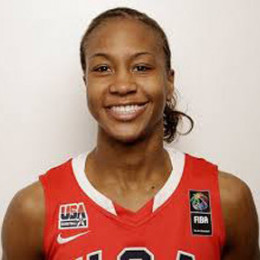 An American professional basketball player, Tamika Catchings is currently dating with basketball player Smith. She was born to a former NBA player Harvey Catchings and, Wanda Catchings. In high school, she recorded the first ever quintuple double in 1997, that is: 25 points, 18 rebounds, 11 assists, 10 steals and 10 blocks. Tamika majored in Sports Management at the University of Tennessee. Catchings is a ten-time WNBA All-Star, a twelve-time All-WNBA selection.

Tamika is famous for recording the first ever quintuple-double 25 points, 18 rebounds, 11 assists, 10 steals. Her sister Tauja also played professionally in the WNBA. Tamika became one of the top WNBA players of all-time with the Indiana Fever. She is a relationship with her boyfriend Smith. He was also a basketball player. She seems very happy with him and they are going to marry soon.