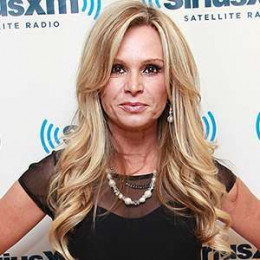 Synopsis: The gorgeous, Tamra Barney is best known for the series, The Real Housewives of Orange County. She earned much of the fame from the series. She played the lead in her own spin-off, Tamra’s OC Wedding. Tamra is the two-time winner of Telly Award for TV Programs for her roles in the series.

Tamra Barney now known as Tamra Judge was born on 2nd September 1967 in Glendale, California.She began her career as a real estate agent before making her way into the Hollywood industry. She earned much of the fame from The Real Housewives of Orange County, an American reality television series which aired on Bravo. The cast member of the series includes- Vicki Gunvalson, Jeana Keough, Lauri Peterson, Belly Dodd, Lizzie Rovsek, Jo De La Rosa and much more. Due to the series, she became one of the television sensation o the country.

Tamra also became popular with her on-off relation with her husbands. She married Darren Vieth and separated in 1990. He called Tamra a cheater and a bad mom after revealing about her suicide attempt after marrying Darren. During their marriage, Tamara gave birth to a child, a baby boy named, Ryan Vieth.

Their son Ryan is also a married man and has tied the knot with Sarah Rodriguez and has a child named, Aa Vieth.

After her first tragedic relation, she started an affair with Simon Barney in 1998. The couple were together for years and divorced in 2001. They became parents of three children, Sidney Barney, Sophia Barney and Spencer Barney. The custody of two girls was given to Tamra whereas Sidney’s custody was given to Simon.

Again on 15th June 2013, she married Eddie Judge at St. Regis Monarch Beach, Ana Point, California. The lovebirds have posted many funny posts on Instagram. It looks like they are satisfied with their relationship. Tamra also changed her surname from Barney to Judge after their marriage. Till date, Barney and Eddie don't have any children, and they aren't any rumors about their divorce either.

Tamra Barney has an estimated net worth of $800 thousand and has an annual salary of $325k from the series, The Real Housewives of Orange County. She also earned from the gym, C.U.T Fitness which she co-owns with her husband.Besides these, she also makes a decent money from the real estate agency Ladera Realtor.

Tamra owns a yellow Porsche and a black Cadillac which she shows off often in the social networking sites.

Tamra Barney married Darren Vieth and he is his first husband. However, their marital relation could not last and separated in 1990.Barney gave birth to her first child, a son named, Ryan Vieth who is also a married man. Sarah Rodriguez is Ryan's wife and together they have a child named, Aa Vieth.

Tamra married another man named, Simon Barney in 1998. The couple were together for years and divorced in 2011.The couple has three children, Sidney Barney, Sophia Barney and Spencer Barney.

Ryan is the only child of Tamra Barney and Darren Vieth. Ryan Vieth married Sarah Rodriguez and has a child named, Ava Vieth.

Sidney Barney is the first child of Simon Barney and Tamra Barney. After their divorce Sidney's custody was given to her father, Simon

Sophi Barney is another child of Simon Barney and Tamra Barney. Tamra got the custody of Sophia after the split with her ex-husband Simon.

Spencer Barney is another child of Simon Barney and Tamra Barney. Her custody was given to Tamra.