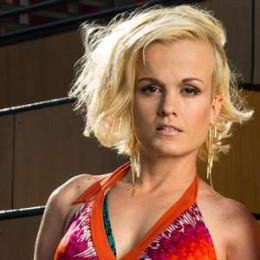 Terra Jole is an actress and television producer. She began her career with the short film ''My First Day''. She is famous for Little Women, a reality television series. She has created a character Mini Britney Spears and it was featured on Chelsea Lately and CSl.

Terra Jole, born on May 25, 1980, in Comal County, Texas, The United States Of America. She is the daughter of mother Isabel Odmark, (24th January 1945, - 2nd October 2016 ) and Richard Odmark. Her father was a building contractor and has served in the U.S. Air Forces. He died from heart failure. She grew up in Comal County.

She went to a local high school in Comal County. But she suffered from Dwarfism which led to some tragic experiences in the past. This one time she was expelled from her high school choir group only because of her short stature.

Soon she took up acting classes and started working in various dramas.

Terra Jole first appearance came in the third season of the documentary series. She saw a post on Little People Of America and found that they were casting. She contacted the producer and asked if she can be part of the show.

Terra told her story to the producer and said she is relocating in L.A. to pursue a musical career. The producer instantly liked her story and that was it, she packed her bag, and drove to Los Angeles. At that time, she only had $200 bucks in her pocket.

A talented and dynamic person, Terra Jole wrote and released her own original music song entitled "Booty Bee" and "Ima Let You Know" in 2014. She has shared stages with various artists such as Miley Cyrus and Cyndi Lauper.

Terra made appearances in many film and television projects such as 'Jackass 3D' and 'The Hungover Games'.

In 2016, Terra released an album of children’s songs called 'Penny’s Playlist', dedicated to her daughter.

As a part of the unique project, Terra launched a website that features original content for mothers and children called 'MiniMama.com'. She also worked at the EP on Little Women: ATL and Little Women: NY! WOW! You go, girl!.

On 30th August 2016, Terra made history as the first little person to compete on 'Dancing with the Stars'. Her partner was Sasha Farber and was eliminated in 'Week 10', after receiving two perfect scores and finished in fifth place.

Terra is currently a member of the Producers Guild of America. She is best known as Mini-Britney Spears.

Terra married Joe Gnoffo, a fellow 'Little Women: LA star' in 2015. The couple first met in the year 2000 during a party. They immediately hit it off and started a 15-year-long relationship.

Joe proposed her while they were going to Smashing Pumpkin concert. He put on the '1979' song and asked her to dance. Soon he asked her to marry him for which she said yes.

But not everything was sunshine and rainbows for the couple as because of many arguments they split for around 1 and a half year. He even moved out of their apartment. But fate has something else in store for them.

After 1.5 years, they rekindled their friendship and eventually got back together.

They tied the knot on June 21, 2015. They welcomed their first daughter in March 2015. She also suffers the same form of dwarfism called achondroplasia. Their son Grayson Vincent D’Artagnan Gnoffo was born in August 2016.

He too suffers from pseudoachondroplasia, a form of dwarfism. Her husband, Joe has the same condition as their daughter, achondroplasia.

Terra's husband Joe was arrested for damaging community property in 1999. He paid $400+ fine and also sentenced to 40 hours of community service for his deeds.

Talking about her past affairs, she was in a relationship when she was 18. She and her then-boyfriend were totally in love but many a time he would make her feel insecure because of her height. Over the years, she dated many guys but none of them sparked her heart as Joe did.

Terra, in her memoir, admitted that she cheated on her husband. And the Little Women star stated how their marital problems contributed to her infidelity.

During her tour all across the United States, she made some decisions which she deeply regrets. The actress even went on to say that she would take back all those things in a heartbeat for her husband.

Not only Terra but her husband, Joe was also accused of cheating on his wife. He used to spend time on his ex-girlfriend's house. But alls well now between the two and they are giving relationship goals.

Terra is a supporter of 'Forte Animal Rescue' the non-profit organization. She has adopted dozens of pets without homes over the years like her mother.

The average salary of the Little Women L.A. is around $2,000 per episode.

Joe Gnoffo is a husband of Terra Jole.He is an actor both of them love each other and they have one daughter.