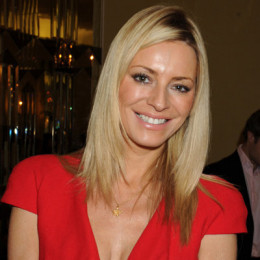 Tess Daly is an English model as well as television presenter who is best known for hosting celebrity dancing show named Strictly Come Dancing.She also hosted Lottery 'This Time Tomorrow'. She was born to Vivian Daly and Sylvia Daly.Her father died due to emphysema. She joined Hayfield Primary School and later to New Mills Secondary School.She was just 16 years old when she did her first modelling job in Tokyo.

Regarding Tess Daly's marital status, this hot model married her long-time boyfriend Vernon Kay who works as a DJ. Together the couple has two daughters Phoebe Elizabeth Kay and Amber Isabella Kay.

Her affairs before marriage are kept confidential and away from the eyes of the media. Her picture, along with her husband and her children, can be found in different sites. Besides being a television presenter and model she is also a writer. She has published her first novel 'The Camera Never Lies' in 2011.

She is renowned for co-presenting the BBC One celebrity dancing show Strictly Come Dancing since 2004.

He works as a disc jockey. They had their marriage ceremony solemnized at St Mary`s Roman Catholic Church in Horwich. Their pictures which were taken while they were dating and their family pictures can be found on the internet.

She is a cute and adorable child. Her pictures can be found, along with her mother, in different sites.

She is the cute and youngest child of Kay family. Her pictures can be found in internet.