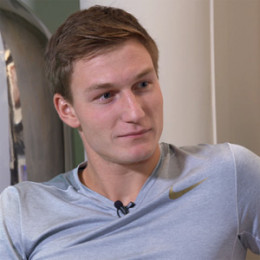 Thomas Rohler is a professional German track and field who competes in the javelin throw. His personal best is 93.90 m and was listed third on the overall list. He is the Gold medalist in the 2016 Olympic Champion held in Rio de Janeiro. Currently, he is in a love relationship with girlfriend, Lucia Francesca.

Thomas Rohler was born on 10th September 1991 to German parents in Jena, Germany. He attended the Johann Christoph Friedrich GutsMuths Sports High School and completed higher education from the University of Jena.

He showed interest in track and field athlete as a child in 1998 and began to build his impact as a junior (under-20) athlete in the javelin throw in 2010. During the match, he threw beyond seventy meters for the first time and represented Germany at the 2010 World Junior Championships in Athletics. He finished the game in the ninth place.

The year, he made his personal best with the throw of 76.37 m, where he placed second at the German junior championships. The following year, he improved with throw 78.20 m which brought him in the seventh place at the 2011 European Athletics U23 Championships.

In 2012, he rose as a senior athlete where he marks 80.79 m and ranked him in the 54th in the world ranking and received his first national title win at the 2012 German Athletics Championship defeating the experienced Tino Haber.

He qualifies for the 2012 European Athletics Championships but couldn’t qualify the 2012 London Olympic though he gives personal best throw. On senior debut for Germany, he placed 13th on javelin qualifying where he challenged finalist Gabriel Wallin but missed out due to a short second throw in the game.

In the 2013 European Athletics U23 Championships, he did not perform well and have his worst competition of the year where he threw 75 m. in the game. He also participated in the games such as 2014 IAAF Diamond League circuit where he

Moreover, he won the gold medal with the throw of 90.30m at the 2016 Summer Olympics in Rio de Janeiro narrowly missing the Olympic record of 90.57 set by Andreas Thorkildsen of Norway during the 2008 Beijing Olympics. Also, he finished fourth with a throw of 88.26 m which was just six centimeter behind the third place.

Like many athletes, Thomas is also dating his girlfriend, Lucia Francesca, though he has never shared his personal life and love affair in the social media till the date.

Somehow, he has shared several photos with Lucia together on his Instagram, and the couple was looking perfect in the pictures. They also appeared together on the red carpet which creates controversy among the viewers and his fans.

The pair is still together, and there is no such news regarding their breakup and rumors.

As per the sources, Thomas has accumulated an estimated net worth of $0.3 million from his career as an athlete.