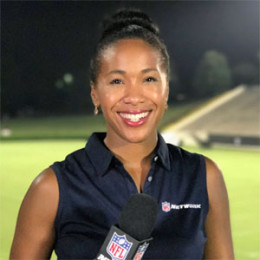 Tiffany Blackmon was born as Tiffany Danielle Blackmon on 10th October 1984 in Attleboro, Massachusetts under the birth sign Libra. Blackmon is American as per nationality, and as far as her ethnicity is concerned, she is African-American.

Her parents, Jacquline and Donald Blackmon (former NFL assistant coach and linebacker) raised her with her sister, Candice and brother Donald Jr.

Blackmon attended the North Gwinnett High School where she used to play volleyball. She was named as defensive MVP and overall MVP.

Blackmon moved to All-Gwinnett County High School. There, he joined the team and selected to the All-State Team. Later, she earned the degree in Journalism from Georgia State University. While studying there, she also played 49 games with the University’s volleyball team.

Tiffany Blackmon, the popular journalist, is currently working in NFL Network as an anchor and the reporter for Comcast Sports Net Houston. Previously, she worked as an anchor for Weekend Sports at KPLC-TV in Louisiana.

Blackmon then joined NBC affiliated KFOR-TV in Oklahoma City. She covered the city’s thunder and the football at the various Universities of the states. Moving on, she also worked as a sports director at KXXV-TV in Texas.

Since 2015, Blackmon started serving the NFL Network. She worked in the shows like Path to the Draft, NFL GameDay Morning, NFL Total Access, and Around the NFL among others.

Tiffany Blackmon, a journalist who won the hearts of numbers of audiences, is currently single. She is neither married nor is engaged till date. She is an animal lover and is a street dog collector.

As of now, Blackmon is more concerned about her career rather than dating life and relationship. She was rumored to be dating a mysterious guy. However, the rumor turned out to be a fake after her tweet,

‘’ Kanye's song for Kim K... hmmm. Gee, I wish my boyfriend would make a song bestowing me w/that title. #SARCASM.’’

Above Tweet, she wants to date a guy who can sing her as Kanye West did to Kim Kardashian.

Tiffany Blackmon, now 33, has the height of 5 feet 8 inches (1.7m). Blackmon who is currently working in NFL network has not yet revealed her exact net worth. But considering her works, she might surely have the net worth of more than a million.

As per the online sources, an average salary for an NFL Network’s anchor is $81k. Blackmon is also an NFL anchor which means she earns the amount close to that.