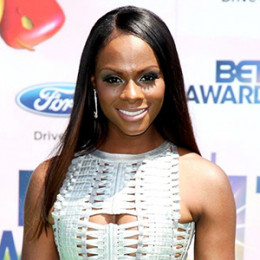 Tika Sumpter is an American actress of African ethnicity, born in New York City. Besides an actress, she is also a model, television host, and a singer. Tika went to Longwood Senior High School for her high school studies and was a cheerleader there. Later, she graduated with a major in communications from Marymount Manhattan College. Tika began her career by working in commercials from 2004. Her professional work in television began after getting a chance to appear as a co-host on the series, Best Friend's Date.

Haves and the Haves Nots co-star Tika Sumpter has been living a blissful conjugal life with boyfriend turned fiance Nicholas James. He is two years junior to the TV host.

Tika Sumpter is currently engaged to Nicholas James since 2016. Sumpter and her partner are blessed with an adorable daughter. Ella Loren was born on October 8, 2016.

Numerous sources claims, James is the father of a baby girl but Sumpter did not confirm his paternity, then she disclosed only his first name. At the same time, the starlet announced she and Nicholas engaged on Christmas Day of 2016. Currently, the family of three lives a luxury life in Los Angeles, California.

Before exchanging vows with her ex-husband Hosea Chanchez. She previously had an affair with the hip-hop artist Drake (Aubrey Graham). Sumpter dated the rapper for a short period in 2005 after they encounter in a dinner.

with an interesting and aspiring career as an actress, Television personality and producer. She's definitely making some decent amount from movies and TV shows.

Tika Sumpter has an estimated net worth of $6 million earned through her career as an actress. The average salary of a movie actress is $52,916-$200 thousand per year whereas the Tv actress generates $35-$170,000 per episode.

Speaking of television hosts earnings, he or she makes $45.6000 -$78000 per year. The 39-year-old hasn't presented a notorious TV shows but also starred in a number of television series and movies to date.

Like Sumpter, her beau Nicholas James pockets thick amount from Tv series and movies. The Greenville, Pennsylvania native worked in some hit movies.

Before turning into an actress, Tika Sumpter also worked as a waitress. Her other works in the TV series include One Life to Live, The Game, Gossip Girl, and The Haves and the Have Nots. Besides series, Tika got into movies from the 2009 movie Brooklyn's Finest and later worked in several other movies including Salt, Ride Along, Ride Along 2, Sparkle, Get On Up, My Man Is a Loser, and Southside with you. Tika Sumpter appeared in Law & Order: Special Victims Unit opposite  Mariska Hargitay and Kelli Gaddish.

Hosea Chanchez is an American actor who is known for his works in For Your Love and The Game. They divorced after a brief period of marriage.

Tika married Isaiah and then had a divorce with her previous husband. They are happily married.

There is not much information about her daughter. One of her photos was found in 2016 in which they looked adorable.