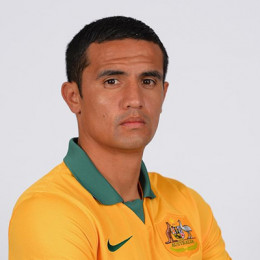 Timothy Filiga Cahill generally known as Tim is a professional Australian football player, who plays for National football team and Shanghai Shenhua, Chinese Super League mostly as an attacking midfielder. He studied at Bexley North Public School and Kingsgrove North High School. His parents were supportive towards his soccer career and encouraged him since he was a little kid. His mother is a Samoan and father is of Irish descent.

He is recognized as all time top scorer for the Australia national team. In 2009, he was named Australian Professional Football Association Player of the Year. He is a married man. He married his childhood love with whom he dated for a long time and finally got hooked up. The couple together have four children. Another football player Leigh Broxham is also happily married. These days he is involved with the UNICEF children's charity and is helping with his best.

They were married in Las Vegas with a huge celebration. The romantic couple seems happy to be each other's life partner.

He was born safe and healthy. He is currently attending his school.

He is a enthusiastic child who has interest on football as well and is often seen playing with his dad.

She was born healthy and is happy to be the only female child of her romantic parents.

He is the youngest child of his parents whose name has not been disclosed yet in any sources.