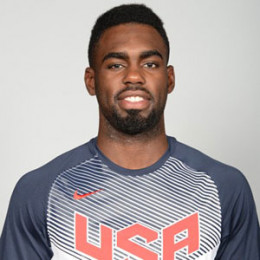 Timothy Duane Hardaway Jr., better known as Tim Hardaway Jr., is an American professional basketball player. He plays for the New York Knicks of National Basketball Association (NBA). He came to limelight after he led the Wolverines to the 2013 NCAA Championship game. He was a first round draft pick of the New York Knicks in 2013, and after two years in New York, he was traded to the Atlanta Hawks in 2015.

Tim Hardaway Jr. was born on 16th March 1992, Alameda, California. He is the son of famous NBA All-Star Tim Hardaway and Yolanda. He grew up along with sibling sister, Nia. From childhood, he was inspired by his father’s career and wanted to become a pro basketball player. His father acted as a second coach and looked after his basketball programs.

He did his school study from Palmer Trinity School before transferring to Miami Palmetto High School. During his school days, he played high school football for a year before focusing on basketball. Michigan's head coach John Beilein invited him on an unofficial visit to watch Michigan play #4 Duke.

Soon he began training with Ed Downs with whom he worked every summer until he became an NBA draftee. Hardaway before his senior year joined Beilein's Elite Camp in Ann Arbor, Michigan He was the first team All-City selection in 2009 and 2010 after being a third team selection in 2008. During the senior session, he averaged 31.7, points, 7.3 rebounds and 4.0 assists.

As a freshman of the year 2010-11, he joined Wolverines and played the match against South Carolina Upstate. He also played the game against Syracuse and UTEP during which he went 13 consecutive games without achieving 50% field goal percentage and 19 games without exceeding the numbers. Also, he earned four Big Ten Freshman of the Week awards.

Following the season, he was invited for the 12-man FIBA under 19 World Championship team by USA Basketball. He along with 11 other players competed as Team USA in the 2011 FIBA U19 World Championships. Also, in sophomore year, he was one of the top 50 watch list selection for the John R. Wooden Award and the Naismith College Player of the Year.

Not only this, he scored 60 points against the #8 Memphis Tiger, #6 Duke Blue Devils, and 2011-2012 Pac-12 season favorite UCLA Bruins in the Maui International Tournament which earned him a place on the All-Tournament team and the team finished in third place. CBS Sports listed him as the 35th best player in its preseason top 100.

In 2013, Forbes sports business reporter Darren Heitner made an announcement on Twitter that Hardaway and his teammate, Bruke was declared for the 2013 NBA draft. He signed with sports agent Mark Bartelstein, who represents 37 NBA players. At very early age, he became one of the players who was invited to the NBA Draft Combine.

In between 2013 to 2015, first, he made an announcement on Twitter that he chose jersey number 5 because it was his father’s number as a rookie and signed a 4-year $6.1 million contract with New York Knicks. During the period, he played the match against Milwaukee, Chicago Bulls, New Orleans Pelicans, San Antonio Spurs, New Orleans Pelicans, Oklahoma City Thunder and few more where he finished fifth in the NBA Rookies of the Year Award.

Furthermore, he was traded to the Atlanta Hawks on 25th June 2015 in exchange for the draft right to Jerian Grant. He made his first start for Atlanta on 17th March 2016 in the match against the Denver Nuggets. Later, he moved back to New York Knicks where he received $71 million offer sheet on 6th July 2017.

Tim has received different awards and honor in his early career of his life. He was the 1st team All-Big Ten season by the coaches and a 2nd team selection by the media in the 2012-2013 Big Ten season.

On 12th March 2012, the U.S. Basketball Writers Association named Hardaway in its 2012-13 Men's All District V Team which was based upon voting from national membership.

Later he was named to the National Association of Basketball Coaches Division I All-District 7 first team on 26th March 2012 and making him eligible for the State Farm Coaches' Division I All-America team.

Tim is currently single and focusing on his career. He is one of the biggest fans of his father, Tim Hardaway and has followed his father’s path. Also, he is close to his father who has helped him in each and every step of his career.

He started to make a name for himself as a reliable player off the bench, first for the Knicks, then the Hawks and now back to the Knicks. Now, he wears the shoes from the Nike’s Kobe signature line.

Besides playing basketball, he loves watching WWE Raw. Also, he is a great fan of Roman Ranges and has shared a picture with Range on his Instagram account. He actively participates in social sites including Instagram where he has over 393k fans followers.