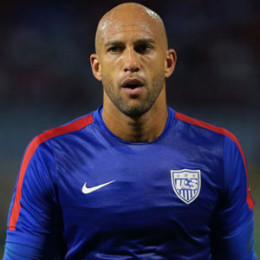 An American professional football player who started his professional football career by debuting in 1997 by playing for North Jersey Imperials and currently plays as a goal keeper for the English football club , Everton and also for the United States national team. When he was just three years old his parents divorced and he stayed with his mother. When he was studying in sixth grade he was diagnosed with Tourette syndrome i.e. part of a spectrum of tic disorders.

Regarding his marital status he was married to his long-time girlfriend. But their married life didn't went well and the divorced due to some family conflict between them which is still kept confidential by him. He is father of two children from her former wife. There are no rumors about any affair or extra marital affair from his former wife and him too after their divorce.

After seven years of their married life they divorced due to some conflict which is still unknown. She is mother to two children.