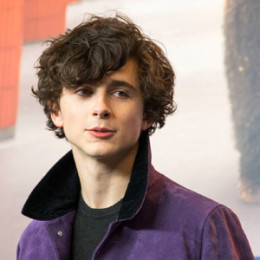 Timothée Chalamet is an American actor. Started as a child artist, he has starred in a number of independent films. He has won the Lucille Lortel Award for Outstanding Lead Actor in a Play. He is best recognized for his breakthrough role as the lead in the movie, Call Me by Your Name.

Timothée Chalamet was born on December  26, 1995, in New York, U.S. He is the son born to Nicole Flender and Marc Chalamet. His father, Marc is an editor for UNICEF whereas his mother, Nicole is a former Boardway dancer and a Yale-graduated real estate broker.

He was raised with his sister, Pauline Chalamet, in Hell's Kitchen, Manhattan who is an actress. Chalamet belongs to the mixed ethnicity of French and American. He can fluently speak French and Italian.

Chalamet completed his graduation in 2013 from Fiorello H. LaGuardia High School of Music & Art and Performing Arts. During his school days, he used to perform the school play. He was involved in the theater program too where he was called by YoungArts.

Chalamet joined Columbia University but in order to advance his acting skill, he transfers to the Gallatin School of Individualized Study, New York University.

Chalamet started his career as a child artist, he made his acting debut with short films before appearing in the Law & Order. He made his feature film debut in 2014 with a minor role in  Men, Women & Children. The same year, he was cast in next two movies;  Interstellar and Worst Friends.

Chalamet has appeared in several movies and series but in a minor role. He got his first lead role in André Aciman's novel-adapted movie, Call Me by Your Name. He portrays the character of 17 years old gay boy, Elio who fell in love with 24 years old Oliver who is spending the summer with his family.

The movie premiered at the Sundance Film Festival on January 22, 2017, but will be released in theaters of US in November 2017.  In 2018, he will be seen in two movies; Beautiful Boy and Woody Allen untitled film.

The teen sensation, Timothee Chalamet, 21, is not married at the moment. He currently resides in New York. Previously, he dated Madonna's daughter Lourdes Leon. The duo ended their relationship in 2013 due to some personal issues.

Currently, Chalamet is living a single life in New York. Once in an interview, he shared his childhood dream was a soccer player and he said,

"I was a coach at a soccer camp in France. I coached six to ten-year-olds when I was around thirteen."

Chalamet is the rising Hollywood star and at the young age, he has gained a much name and fame. He succeeds to maintain an astonishing net worth in his life.

His movie, Men, Women & Children was one of the successful films of 2014 which only not gained critical acclimation but also succeeds to earned worldwide collections of $675 million.