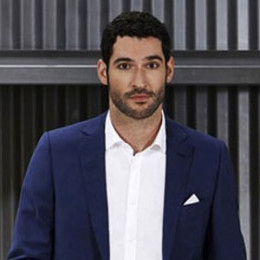 The Welsh actor Tom Ellis is widely known for playing Dr. Oliver Cousins in the BBC soap opera EastEnders and Detective Sergeant Sam Speed in British TV sketch comedy The Catherine Tate Show. He is a former French horn player for the City of Sheffield Youth Orchestra. Ellis is also popular for his role as Sam in the BBC comedy Pulling and for the playing Lucifer in the Fox's Lucifer. At present, he is in a relationship with American actress Meaghan Oppenheimer. Previously he was married to Tamzin Outhwaite.

Tom Ellis was born Thomas Paul Ellis on November 17, 1978, in Cardiff, Wales, United Kingdom. He is the son of Chris Ellis and Marilyn Jean Hooper. He spent most of his early childhood days growing up in his hometown Cardiff along with his three sisters.

Regarding his nationality, Ellis is British and ethnicity wise, he is Caucasian. He graduated from High Storrs School in Sheffield. He is also musically talented as he played the French Horn in the City of Sheffield Youth Orchestra.

Ellis eventually became a prolific onscreen presence after playing the role of Justyn from 2005-06, in the comedy-drama TV series No Angeles. He shared the screen alongside Louise Delamere, James Frost, and Jo Joyner.

Elis gained more fame when he portrayed the character of Thomas Milligan in the series on the BBC One's science-fiction television programme Doctor Who.  In July and August 2009, he featured along with Fay Ripley in ITV comedy drama Monday Monday.

From 2015, Ellis is portraying the character Lucifer Morningstar in Lucifer. Most recently, he voiced Oscar Wilde in Family Guy.

Tom Ellis' Net Worth and Height

Ellis has garnered a good amount of net worth from his prolific career which is estimated to be approximately $5 million, although some estimations have it as much higher. He is the proud owner of 1958 Chevrolet Corvette worth around $55,100.

Miranda actor Tom Ellis is currently in a relationship with his actress girlfriend Meaghan Oppenheimer. They started dating in 2015 and still share a strong bond. In 2016, a source close to Tom stated,

“They’ve been an item since last year and are very loved up,”

The good-looking couple has shared several romantic pictures of themselves on their social media. Prior to his relationship with Meaghan, he was married to Tamzin Outhwaite. He proposed to his former wife Outhwaite on her birthday in November 2005 and tied the knot on June 11, 2006.

They welcomed their first daughter, Nora Ellis, in May 2005. She gave birth to their second daughter, Florence Elsie Ellis on 17 June 2008 and third, daughter, Marnie Mae Ellis, on 1 August 2012.

The conjugal life between them ended in divorce on August 29, 2013. The couple reportedly divorced after Tom allegedly had one night stand with a mysterious female during the shoot of Gothic, in the USA.

Following their divorce, Ellis dated Estelle Morgan and split in 2013 after dating for a while. He is a close friend of James McAvoy whom he first met through his former wife Tamzin Outhwaite.

Here is the video of Tom Ellis mentioning his five amazing facts.

Tamzin Outhwaite is a British actress from London. She is well known for playing the role of Mel Owen in the BBC One soap opera EastEnders from 1998 until 2002.

Ellis Nora is the daughter of British actor Tom Ellis and his girlfriend, Estelle Morgan.