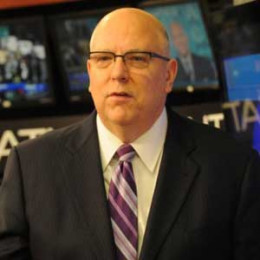 An American meteorologist, Tom Skilling is working for WGN-TV Channel 9 as a meteorologist since 1978. He used to work for different TV networks including- WKKD-AM & FM, WLXT-TV, WITI and much more. Tom was consulted for the movie- The Weather Man, a hit movie with the cast member- Gil Bellows, Nicolas Cage, Nicolas Hoult, Michael Caine and Michael Rispoli and other. Moreover, he is also an author of the book named- Ask Tom Why.

Born as Thomas Ethelbert Skilling, III on 20th February 1952 in Aurora, Illinois is a well-known meteorologist.  His parents, Thomas ( a mechanical engineer) and Betty Skilling raised him along with his three siblings, Jeffery Skilling (the former CEO of Enron), Mark Skilling and Sue Skilling.

Tom finished his high school from West Aurora High School and later graduated with the subject of meteorology and journalism from the University of Wisconsin- Madison. During college, he worked in various TV networks as a meteorologist. In 1995, he received an Honorary Doctorate of Humanities from Lewis University, Romeoville, Illinois.

Also, from 1975-1978, Tom worked as a meteorologist at WITI in Milwaukee, Wisconsin. Leaving WITI, he shifted to WGN-TV. His works are appreciated by the audiences and critics too. He used the latest technology in the computer imagery and animated techniques in his work (broadcasting).

Furthermore, he became the member of the American Meteorologist Society and also the National Weather Association. At the Fermi National Accelerator Lab, he hosted the 36th annual Tornado and Severe Weather seminars.

The 65-year-old Tom Skilling is not married yet and is single. Well, till now no news about his married life and affairs have surfaced. Maybe is very good at keeping his private life away from the media.

Well, one needs privacy and Tom's decision to no to disclose his relationship with media should be respected.

Skilling is listed in the top famous meteorologist of the world. He is living a ravishing and to maintain such lifestyle we must have a huge net worth.