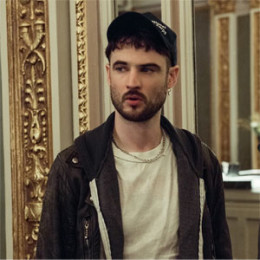 Tom Sturridge, a 31-year-old English actor is best recognized for his work in movies like; "Being Julia", "Like Minds", and "The Boat That Rocked". He entered into the world of the limelight as a child artist. Tom received Tony Award nomination in the category of Best Performance by an Actor in a Leading Role for her amazing work at Broadway play "Orphans".

Tom Sturridge was born as Thomas Sidney Jerome Sturridge on December 21, 1985, in Lambeth, London. He is the eldest son of Charles Sturridge, a renowned director, and Phoebe Nicholls, an actress. He is British and belongs to the Caucasian ethnicity.

Sturridge raised along with his two younger siblings, brother Arthur and sister Matilda, and both them are theater actors. He belongs to the actors family, and that might be the reason of his interest towards acting.

He joined the  Harrodian School and completed his schooling. Later, he went to Winchester College, but he left before sitting his A levels.

Tom began his career as a child artist as he first acted in the play ‘The Trial.' He made his appearance on television for the first time in 1996 with Gulliver's Travels along with his mother.

In 2004, he was cast in the movies like; Vanity Fair, Being Julia and A Waste of Shame where audiences and critics well praised his performance.

In 2009, he made his stage debut in Punk Rock and won various awards including Critics' Circle Theatre Award for  Most Outstanding Newcomer in 2009.

Sturridge worked on several movies and TV shows like;  Waiting for Forever, Junkhearts, Wastewater, On the Road, Far from the Madding Crowd, The Hollow Crown and much more. He also appeared in the play Orphans as Phillip.

Tom Sturridge is not married at the moment. Priorly, he dated an actress and fashion model, Sienna Miller. The duo first met in 2011 and eventually fell in love with one another.

The couple has a daughter, Marlowe Ottoline Layng Sturridge together who was born on 2012. They are planning to get married also, but due to some irreconcilable differences, they decided to split apart in 2015 with mutual understanding.

One of the rising stars of Hollywood, Tom has earned a good amount of salary from his career. He has the net worth of $3 million.

Marlowe Ottoline Layng Sturridge is the only daughter of Tom and Sienna. She was born on 2012.