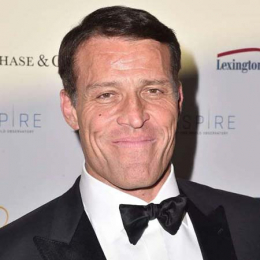 American author, philanthropist, and life coach, Tony Robbins is best known for his infomercials and seminars. He is also popular for his books like Unlimited Power and Awakens the Giant Within. Robbin was included on the Worth Magazine Power 100 list in 2015 and 2016. More to that he was ranked #100th on the Forbes Celebrity 100.

Tony Robbins is married to the actress named Sage Robbins. The duo shared the wedding vows on October 15 of 2001, following their two years of a dating relationship. Moreover, the wedding was held in Fiji among their close friends and family. 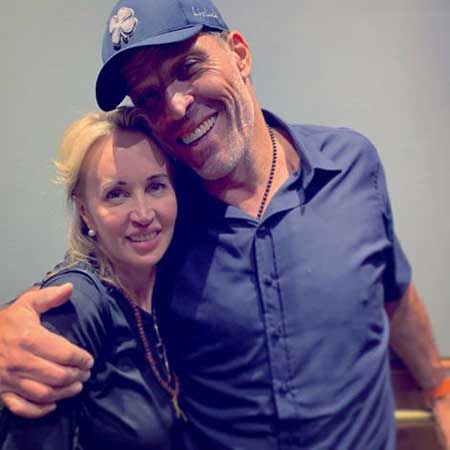 All things for the duo started in 1999 when they met at one of his seminars was held in Hawaii. The couple started to date from the same year and ever since then, the pair is together. Further, the pair is about to celebrate their eighteen years of marital relationship this coming October of 2019. Here you can see them explaining how they met and fall in love with one another,

The pair shares a good bond and when Tony was asked about his wife in an interview he said,

"If I look at my life and say, What would my life be without Sage? everything else would be dully bt comparison. I'm not saying that to blow smoke. This (Sage) is the gift of my life."

Apart from that, Tony was previously married to Rebecca "Becky" Jenkins. The duo shared the wedding vows in 1984 after meeting at a seminar. Further, they used to share a good bond in their initial years but after facing some highs and lows in their relationship they parted their ways in 1998 after divorcing legally.

It’s #gameday! matter which team you’re rooting for tonight, it’s always inspiring to watch top athletes — those who have achieved true #MASTERY at what they do — having worked so hard, for so long to compete for THIS. . Who else out there is watching the #SuperBowl?? Who are you pulling for?

The pair is a proud parent of Junkins' three children whom Tony adopted after being in a marital relationship. Despite being a stepfather, Robbin showed enormous love to his children.

Talking about his divorce, Tony, in an interview, openly said how he knew his marriage was doomed from the beginning, yet, he kept on pushing it further.

Even at the altar, he never wanted to go through the marriage but in the end, he did it anyway. According to him, he didn't file for divorce earlier because he didn't want to disappoint her. But he did file for divorce and finally separated from Rebecca in 2001. And after his current wife, Sage came into his life, life became worthwhile.

He said in the interview,

“I never would have found this soul if I hadn’t done that. If I look at my life and say, ‘What would my life be without Sage?’, everything else would be dull by comparison. I’m not saying that to blow smoke. This is the gift of my life.”

Prior to that, Robbins was dating a feminist named Liz Acosta. The duo dated for several years but later got separated because of their personal issues. But, Robbins gave Liz's son his name Jairek Robbins who is a personal empowerment trainer.

Tony most recently fall in controversy in May of 2019 when he was accused of sexual harassment to his fans and staff. The investigation by BuzzFeed news explained that Tony used to expose his genitals to his assistants and sexually harass his fans. More to that, Tony denied those allegations and said,

''I have been the target of a year-long investigation by BuzzFeed. Unfortunately, your organization has made it clear to my team that you intended to move forward with publishing an inaccurate, agenda-driven version of the past, pierced with falsehoods."

Along with that, Tony fall in many controversies like in 1995 for violating the agency's Franchise Rule. Next, in 2000 Wade Cook filed a lawsuit against Tony for using copyrighted terms from Cook's nook Wall Street Money Machine.

What is the Net Worth of Tony Robbins? Know about his Earnings, Salary

Tony Robbins holds an impressive net worth of $500 million, all thanks to his career as an author, philanthropist, and life coach. In addition, the average salary of an author is $55,420 per year. Similarly, the average pay for a philanthropist is $155,200 annually.

This past week in London was absolutely spectacular! We had 12,000 beautiful souls in attendance from 68 countries, and 9 languages translated simultaneously. Incredible!! That’s 12,000 lives transformed and ready to take MASSIVE ACTION, create breakthroughs, and ultimately, be a FORCE FOR GOOD in this world. I am so grateful to everyone for showing up, doing the work, and playing FULL OUT. I am honored and humbled to witness thousands of people become more true to themselves, tapping into their inner strength and unleashing their power. I am so grateful to be part of your journey – is an absolute privilege to serve in this world . And a HUGE thank you to our surprise guest and my friend, will.i.am @iamwill who flew all the way out here to join us for an evening — you moved us with your inspiring speech and truly delighted us with an unforgettable performance. . Were you here at the @excellondon with us? Leave a comment and let me know what your goals are as you leave this event. How has it touched your life? What area of your life will YOU take to the next level? Our next UPW will be in Dallas this July! I look forward to seeing many of you there! #TonyRobbinsUPW#UPW #UnleashThePowerWithin #lifewillneverbethesame @millakuhto

Tony started his career at the age of 17 through promoting seminars for a motivational speaker and author Jim Rohn. After that, in 1988 he released his first infomercial named Personal Power which was produced by Guthy Renker. Next, in 2016, he partnered with several organizations and peoples to purchase an eSports pro gaming organization. Later the team won The International 7, a Dota 2 tournament with a prize of $24 million in 2017.

Robbins is also an author who wrote five books in his career. His books are,

The 59-year-old author is also a Philanthropist who worked in many organizations like The Tony Robbins Foundation, Feeding America(by donating profits of his books), Spring Health, and Underground Railroad. Apart from that, he also appeared in films like Shallow Hal, The Singularity Is Near: A True Story about The Future.

Back in the 1980s, the author purchased a 525-acre house in Vanua Levu, in Fiji for $15 million. Robbins updated a couple of things in it and made a resort with a title Namale resort which worths over $52 million as of now. Furthermore, near the resort, there is a personal house of Robbin where he added artifacts and tools which are suitable for him. 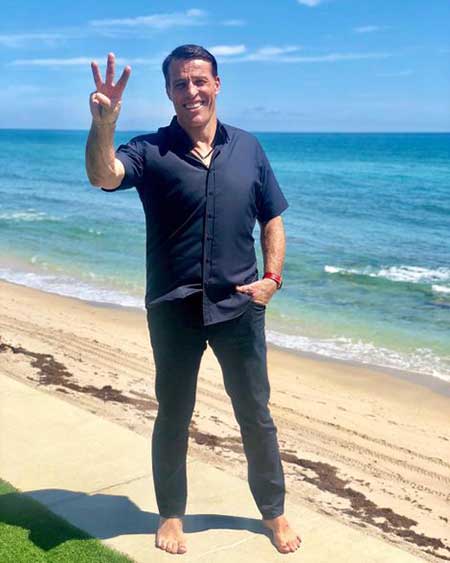 Tony was previously married to Rebecca "Becky" Jenkins. The duo shared the wedding vows in 1984 after meeting at a seminar.

Tony Robbins is married to the actress named Sage Robbins. The duo shared the wedding vows on October 15 of 2001, following their two years of a dating relationship.