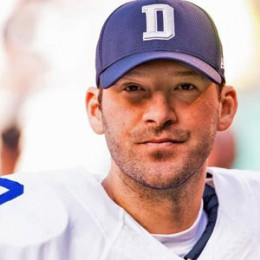 Antonio Ramiro Romo, better known as Tony Romo, is a former American football quarterback who got picked to his first Pro Bowl game in 2006 representing the Dallas Cowboys. He has set a number of Cowboys franchise records including most career touchdown passes and single season passing yards. This successful player is happily married to Candice Crawford and blessed with two sons: Hawkins Crawford Romo and Rivers Romo.

Tony Romo was born on 21st April 1980, San Diego, California to parents Ramiro Romo Jr., served in the United States Navy and Joan (Jakubowski) Romo, a store clerk. He used to play baseball and was selected to the Little League All-Star team when he was a child.

He attended Burlington High School where he started as a quarterback as a junior during 1996. The following year, he and Demons finished with a 3-6 record. He won honors for All-Racine Country football team and Wisconsin Football Coaches Association All-State first team for his performance. Apart from football, he was also interested in golf and tennis. He even played in the first five for his high school varsity team.

His impressive stats of 164 of 278 completed passes for 2,583 yards and 27 touchdowns, won him second place in Division I-AA in passing efficiency in 2000. He even got honors like All-America honorable mention, an All-Ohio Valley Conference member and the OVC player of the Year for his performance.

Tony started his career as a national football player after he attended the 2003 NFL Combine. Though he attracted some scouts, he went undrafted by NFL team during the NFL Draft 2003.

Later, he was pursued by former Denver Broncos head coach, Mike Shanahan and was signed as an under rookies free agent by the Dallas Cowboys. He had very little playing time during his first three seasons with the team, but eventually, in 2006 he became the starting quarterback.

Firstly, he entered 2003 training camp third on the Cowboy’s depth chart behind Quincy Carter and Chad Hutchinson. Through 2004 and 2005, he served as the holder for placekicks, as one of his early career highlights was in 2004 where he scored the winning touchdown with six seconds left in a preseason game against the Oakland Raiders.

He helped the team boost their overall performance, gaining him much appreciation as the third-string quarterback. Later on 19th November 2006, he led the Cowboys past the Indianapolis Colts, one of the NFL’s unbeaten team. In the game, he completed 19 of 23 passes, winning the game by 21-14.

He also supported the Cowboy to win Thanksgiving Day Game against Tampa Bay Buccaneers by 38-10. Not only this, he went 22-29 with 306 yards, and five touchdown passes with no interceptions. For his brilliant performance, he was awarded FOX’s Galloping Gobbler Award as the Thanksgiving Day MVP. He completed the 2006 regular season after having passed for 19 touchdowns with 2,903 yards. Also, he became the second ever quarterback of the team, selected for the ProBowl.

In 2007, he led his team to win their first National Football Conference East Division title in nine years. He finished 2007 regular season with a total of 36 touchdowns, along with 4,211 passing yards.

Tony fabulously led his team to a 28-10 win against the Cleveland Browns during the 2008 season opening. However, he received criticism after the final game of the season against the Philadelphia Eagles, where the Cowboys suffered a 44-6 loss. Then in 2009, he silenced his critics by achieving a career-high 4,483 yards, leading his team to their first postseason victory after 13 years.

He was limited to only six games during 2010 seasons because of fracture. Romo, however in the 2014 season, regained his form and that season was regarded as his best in his career. He led the NFL with a 113.2 passer rating while throwing 34 touchdown and 9 interceptions. His team also won a division title during the period.

Because of injury, he appeared in very few games in the 2015 and 2016 seasons. In April 20017, he announced his retirement from the NFL. Soon after his retirement, CBS Sports hired him as a commentator for NFL TV broadcasts.

Apart from football career, he has hosted a youth football camp in Burlington, Wisconsin, since 2004. As an amateur golfer, Tony attempted to qualify for the 2004 EDS Byron Nelson Championship and the 2005 U.S. Open, but he failed to do so.

Also, he is a frequent guest on national sports radio program and has hosted Inside The Huddle 2006 and 2007 season that aired on local talk radio in Dallas along with linebacker Bradie James. In September 2008, he signed a 5-year $10 million endorsement deal with apparel marked Starter.

He has also won the throwing a table of five touchdown passes in the game twice in 2006 and 2013. He has the record of most passing yards in the game in 2013.

Talking about Tony’s personal life, he married Candice Crawford, 2008 Miss Missouri USA and sister of actor Chance Crawford, on 28th May 2011, after dating for two years since 2009. He proposed to Candice on 16th December 2010 during her 24th birthday.

Romo with his wife has two sons Hawkins Crawford Romo and Rivers Romo. Candice has announced her pregnancy early this year in February 2017. The same year, they welcomed the kid.

Tony was previously in a love relationship with Jessica Simpson, an American actress, and singer in November 2007. Unfortunately, the couple separated on 9th July 2009, the night before Simpson’s 29th Birthday.

Tony spent his entire career playing for the Dallas Cowboys of National Football League. He has successfully earned an estimated net worth of $70 million: as he signed eight years $108 million contracts with Dallas Cowboys including $5 million signing bonus, $55 thousand guaranteed and an annual salary of $18 million.

Currently, Tony resides with his wife and children in a luxurious house in San Diego, California which he bought in 2009. The present value of the house is around $2.5 million. He is also passionate about cars and owns an Audi, Range Rover, Ford, Mustang, American Muscle.

Stay on marriedwiki.com for more news!

Tony Romo married Candice Crawford on 28th May 2011. Candice is the 2008 Miss Missouri USA and a former journalist for Dallas television station KDAF. She is the sister of actor, Chance Crawford.

Born on 9th April 2012, Hawkins Romo is the elder son of Candice Crawford and Tony Romo.

Born on 18th 2014, River Romo is the younger daughter of Candice Crawford and Tony Romo.