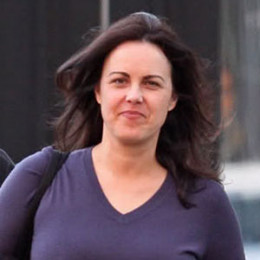 American author and a former veteran, Tracey McShane rose to fame after marrying her current husband, Jon Stewart who is a famous American comedian and an actor. Apart from being the wife of a famous host, she is also a proud mother of two children. She is a proud vegan and her husband also began vegetarian diet in 2015. The couple also worked a lot to protect abused animals. They received approval to open a 45-acre animal santuary for animals saved from slaughterhouses and live markets.

Tracey McShane was born Tracey Lynn McShane on 6th August 1967 in Philadelphia, Pennsylvania under the birth sign Leo. McShane is American as per nationality, and as far as her ethnicity is concerned, she is White.

McShane is a longtime animal advocate and a former veterinary technician. She is also an author of a book titled, Do Unto Animals: A Friendly Guide to How Animals Live and How We Can Make Their Lives Better. Whereas, her husband is American comedian, actor, host, and a TV personality best known for being the host of The Daily Show.

Tracey McShane and Jon Stewart started dating after meeting for the first time in 1990 on a blind date with the help of their mutual friend.

After dating for several months, the couple tied the knot in November 2000 in the presence of limited guests including families, close friends, and relatives. The pair shares two adorable kids together named, Nathan Thomas Stewart and Rose Stewart. The couple is still together with no such buzz about their divorce and extramarital affairs.

Before marrying Stewart, there were rumors that she was already married to someone else in the past. Later, the news turned out to be false. In 2005, McShane was arrested on an accusation of driving with a suspended license.

McShane is a long time vegan and her husband started a vegetarian diet in 2015.

McShane and her husband received approval to open a 45 acre animal sanctuary in Colts Neck in 2017. It has become the shelter for animals saved from slaughterhouses and live markets.

Tracy McShane, now 50, is an animal lover and also an author. McShane with her husband shares an accumulated net worth of $80 million. She also earns from her book, Do Unto Animals: A Friendly Guide to How Animals Live and How We Can Make Their Lives Better priced $32.77 each on Amazon.

The couple recently bought a farm to use as an animal sanctuary for $4 million. In 2017, they sold their penthouse for $20 million.

Nathan Thomas Stewart is the first child of Tracey McShane and Jon Stewart who was born on 3rd July 2004.

Two years after the birth of the first child, Jon Stewart and Tracey McShane welcomed their second child and first daughter in 2006.