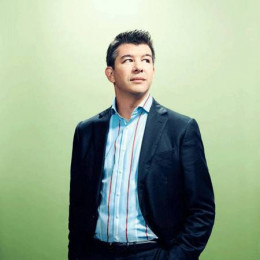 Travis Cordell Kalanick is the co-founder of Red Swoosh, a peer-to-peer file-sharing company, and the Uber, a transportation network company. He is one of the richest businessmen with an estimated net worth of $5.9 billion.

Travis Kalanick is possibly single at the moment. Previously, he dated Angie You and broke up later. The couple even brought a townhouse in the upper hills of San Francisco's Castro neighborhood.

He was also rumored of dating ex-wife of Chris Martin, lead vocalist of a popular band "Coldplay". The couple posted their romantic pictures in their personal Instagram profile.

Due to his Uber Mobile phone app, he has been facing a lot of controversies.

Travis Kalanick holds an impressive net worth of $5.9 million. According to the 2014 Forbes Magazine, he entered to the richest Americans at 290th position, with a net worth of $5.3 billion.

Travis Kalanick was born on August 6, 1976, in Los Angeles, California, the U.S. His father Donald worked as a civil engineer in Los Angeles and his mother worked for the Los Angeles Daily News.

Kalanick wanted to study computer engineering so he attended the University of California, Los Angeles.