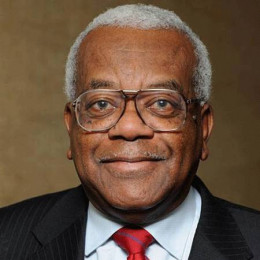 Sir Trevor McDonald is a newsreader and journalist, best known as a news presenter with ITN. He started his journalism career as a BBC radio producer in 1969. In 1999, he was knighted by Queen Elizabeth II for his services to journalism. At 2011 British Academy Television Awards, he was awarded with a BAFTA fellowship. He holds honorary degrees from the Liverpool John Moores University and University of Plymouth.

As per the updated information, till now he has been married two times. He has fathered three children, two from the first marriage namely Joanne and Tim and one from the second one named Jack.

He separated with an official divorce from his first wife Beryl due to some trust issues in 1985, he stated that his wife used to have a problem with his official duties and timings. There is no controversy related to his personal and professional life.

He married his second wife Josephine McDonald in 1988.

Mcdonald has a huge net worth and salary at present.

George McDonald was born on 16 August 1939 in San Fernando, Trinidad, and Tobago.

He is best known for his work as a news presenter with ITN.

She is the first wife of Sir Trevor who first met in a cricket match in his native Trinidad. They have two grown up children.

She is a former ITN production assistant. The couple has raised a son together from their marriage.

He was born safe and sound and is the first of Sir Trevor and his wife.

She is the only daughter born to Sir Trevor and his wife. Her Birthday is unknown.

He was born safe and healthy. His date of birth is unknown.