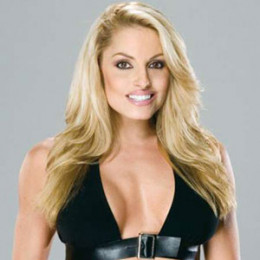 Patricia Anne Stratigias generally known by her ring name Trish Stratus, is a retired wrestler, actress, former fitness model and television personality. She attended Bayview Secondary School and was a student at York University in Canada where she majored in Biology and Kinesiology. She is the daughter of Alice Stratigias and John Stratigias. She owns a yoga studio named "Stratusphere" and has been involved in various charity works.

Once she has been awarded the title of Business Woman of the Year and for her yoga studio, she has won Best Yoga Studio award in 2013. She was once romantically linked with various WWE superstars but never got hooked with anyone. She is now married to her childhood love Ron Fisico with whom she stayed in relation for around fourteen years and finally got married. The couple went shortly for their honeymoon after getting married and have a baby boy together.

He is a professional body builder and her long time boyfriend. They knew each other since they were in their high school.

He was born safe and healthy and is happy of being the only child of his romantic parents.