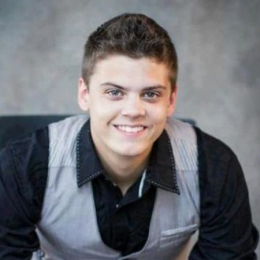 Tyler Baltierra is MTV personality who appeared on the show Teen Mom alongside his pregnant girlfriend, Catelynn Lowell. He and Catelynn authored a book together titled Conquering Chaos. Tyler, Catelynn, Farrah Abraham and other former Teen Mom stars returned for a revived version of the show called Teen Mom OG. He has gained his popularity through Teen Mom and now is a known as a model.

Tyler was born on January 12, 1992, in Mount Clemens, Michigan to parents Kimberly Forbes and Butch Baltierra. He has a sibling named Amber Baltierra. Baltierra is an American citizen and belongs to white ethnicity.

He graduated high school in 2011, and after that, he attended Baker College majoring in psychology. Baltierra stated that he wanted to be a social worker and wanted to work with at-risk youth.

At the young age of 16, Tyler made his girlfriend now his wife, Catelynn pregnant. This landed them an opportunity to appear on the show called Teen Mom, a reality show that focuses on the girls' struggles with motherhood and the difficulties they have to face with the family and relationship.

Baltierra and his wife also were part of the revived version of Teen Mom called the Teen Mom OG.

Apart from being in the show Tyler and Catelynn jointly authored a book titled Conquering Chaos, a book about their life released in March 2015.

Tyler is a married man and is a father of two daughters. Baltierra married his longtime girlfriend, Catelynn.

She became pregnant when she was 16, but they gave up their daughter Carly for adoption as they were too young to look after her.

Tyler tied the knot with Catelynn recently in August 2015 and welcomed their second daughter named Novalee on January 1, 2015.

There were rumors about both of them having an affair, but they seem to have worked out the differences. Now they are living a happy life with no signs of getting a divorce.

The net worth of Tyler has not been shared with the public yet. He is a rising TV personality and might have worth in six figures.

Taylor and Catelynn were together since they were teens. Both of them appeared on the show Teen Mom when she was pregnant at the age of 16. They gave up their first daughter for adoption as they were too young to take care of her and recently gave birth to their second daughter Novalee on 2015.

Catelynn was pregnant with her first child, Carly when she was 16. Tyler and Lowell had to give their daughter for adoption as they were too young at the time to take care of their daughter

Tyler and Catelynn's second daughter was born on New years day of 2015.