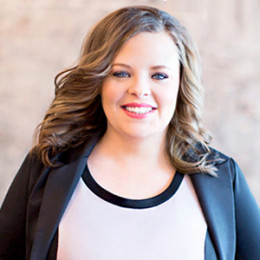 Born and raised in Michigan, Catelynn Lowell is a well-known TV personality, author, and a public speaker. She rose to fame after appearing in the MTV reality TV Series, "16 and Pregnant" in 2009. She is an author too as in 2015 Lowell released her first book, "Conquering Chaos". Lowell married her longtime boyfriend, Tyler Baltierra in 2015. The duo is proud parents of two daughters.

Lowell married her longtime boyfriend, Tyler Baltierra in 2015. The duo who is proud parents of two was all set to welcome a third member in their family but last month, Lowell revealed that she suffered a miscarriage.

Catelynn Lowell was born on March 12, 1992, in Port Huron, Michigan to April Brockmiller and David Lowell. She is American and belongs to the White-American ethnicity.

Lowell was just 3 years old when her parents separated and got divorced. Since then she started living with her mother and three siblings, two brothers, Andrew Lowell and Nicholas Lowell, and a sister, Sarah Lowell.

She has a hard childhood because of poverty and she moved to different states including Texas, Florida, Ohio, and Michigan along with her family. She completed her high school in 2011from a community college but during her high school days, she got pregnant with her first child with then-boyfriend Tyler Baltierra. Following her pregnancy, she appeared in reality show 16 and pregnant. Currently, she's attending Baker College taking Social Work as major.

Catelynn Lowell participated in the MTV reality TV series, 16 and Pregnant in 2009. The series followed the stories of pregnant teenage girls in high school who was dealing with the hardship of teenage pregnancy. She was 4 months pregnant with her first child during the show.

Lowell also featured in the three spin-offs of 16 and Pregnant, Teen Mom, Teen Mom 2 and Teen Mom 3. Each of the series follows the lives of a contestant from their respective season.

The show was renamed after its 5th season as Teen Mom OG. She is the part of the show since its first season. Currently, she featured in the 8th installment of the show along with her husband.

In March 2025, Lowell launched her first book, Conquering Chaos along with her husband, Tyler Baltierra. The book talked about the couple journey in their own words. Also, Catelyn Lowell and Tyler Baltierra released their couple's show, Reunited back in 2016 but the show got canceled after the release of one episode.

Catelynn Lowell has earned $75k per season with $20k bonus from her Teen Mom series. As per some online sources, her net worth isn't less than six digit figure but the exact amount is still under review.

She also wrote a book in 2015. Her first book, Conquering Chaos was released that year and it sold hundreds of copies all over the country. Amazon rated the book with 4.4 stars out of the 5. Its Kindle cost $5.99 and hardcover costs $8.42.

Catelynn Lowell is happily married to her longtime boyfriend, Tyler Baltierra who is also a reality star. The duo first met when they were in high school and eventually fell in love. They were in an on-off relationship during their high school days but reunited after few years and ended up getting married.

Lowell was pregnant with her first child with Baltierra during high school. Her pregnancy wasn't easy because at that time she was just 16 years old and there was no financial or emotional support from her family.

Soon the duo welcomed their first child, Carolyn "Carly" Elizabeth Davis on May 18, 2009, but realized that they weren't able enough to raise a child by themselves. So, the couple decided to place their baby for adoption. The whole process was documented and featured in the series Teen Moms.

The pair also found the adoptive parents for their baby and signed for the "open adoption" with Carly's adoptive parents, Brandon Davis and Theresa Davis, which means they are allowed to meet their daughter once a year and receives photo regularly.

The adoptive parents are step-siblings as Lowell's mother married Balyierra's father but their parent's relationship was tumultuous. In 2012, Lowell asked the custody of her younger brother because of her parents' abusive behavior. After a year, the couple gained the legal guardianship of a younger sister as well.

Following this, the duo was blessed with their second child, daughter, Novalee "Nova" Reign, on January 1, 2015. Soon after Nova's birth, the couple exchanged the vows on August 22, 2015, after 9 years of relationship.

Their wedding was a small ceremony attended by her Teen Mom OG co-stars, Maci McKinney, Amber Portwood, Kailyn Lowry with their respective partners.

In November 2017, Lowell revealed she was seeking treatment after experiencing the suicidal thoughts. She again struggled with mental health in January 2018 because of her childhood trauma.

In an episode of Teen Mom OG, the couple revealed, Lowell had a miscarriage and they lost their third baby. She stated,

"I feel like maybe it just wasn't the right time. Thank God for kids and husbands," she shared with a producer after confirming the news during a doctor visit. "If they weren't around, I probably would have offed myself, seriously. I mean, I'm sure a lot of people can relate. Like, it's like I don't want to live another day like this, you know?"

Check out the video where Lowell talked how she handled her miscarriage.

Tyler Baltierra is best known as the husband of Catelynn Lowell. The duo married after nine years of relationship in 2015.

Carolynn "Carly" Elizabeth Baltierra is the first child of Catelynn Lowell. Lowell and her husband gave Carly for adoption.