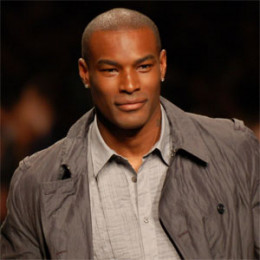 Tyson Beckford is a 49-year-old American fashion model and actor. He is best known as Ralph Lauren model and host of Bravo's, Make Me a Supermodel. He was named as the greatest male model of all time in 2014 by the Vogue Magazine.

Tyson Beckford was born on December 19, 1970, in Rochester, New York. He is born to father, Lloyd Beckford who is an Afro-Jamaican with Panamanian descent and mother, Hilary Dixon Hall.

Beckford started his modeling career when he was recruited to hip-hop magazine, The Source by Jeff Jones in 1992. Later, Ralph Lauren selected him he was selected as the front model for the company's Polo line of male sportswear.

In 1995, he was named "Man of the Year" by the VH1 and even was considered as one of the "50 Most Beautiful People in the World" by PEOPLE magazine. Backford is associated with renowned companies like Soul Artist Management and D'management Group. He has succeeded to rank 38 on VH1's 40 Hottest Hotties of the '90s.

Beckford made his television debut in 2003 with ABC network's celebrity reality game show, I'm a Celebrity... Get Me Out of Here!. He also co-hosted the Bravo TV modeling show, Make Me a Supermodel along with supermodel, Niki Taylor.

He mentored and judged the participates of the first few episodes of the Australian version of Make Me a Supermodel. In 2012, he appeared in Fox's dating game show, The Choice as a contestant. Beckford is one of the hosts for British next top model.

Tyson Beckford is happily married to his longtime girlfriend, Berniece Julien. The duo exchanged vows in 2009 at an intimate ceremony. Currently, he resides in New Jersey along with his wife and son.

Previously, he was in a romantic relationship with celebrity stylist, April Roomet who also appears on the E! Television program, Candy Girls. Beckford has a son, Jordan Beckford (born in 1998) with her. Besides, he was linked up with several models and actress.

Beckford is an Ambassador of Kick 4 Life, an organization which uses the power of soccer to engage vulnerable youth in holistic care. In 2008, he supported the National RESPECT! Campaign which works against domestic violence.

Beckford is one of the successful and richest models. He has an estimated net worth of $16 million. In 2012, he was paid an astonishing sum of $40,000 for sixty seconds of his work.

In an interview with MrPorter.com, he said,

“I once walked in a fashion show - literally, just walked - for no more than a minute or two and they paid me a silly amount of money.”

In 2005, he sued Sean John for breaching the contract. He signed $1.2 million worth deal to lend his face and image to the company's advertising campaign. He was sued for $300,000 payments but John failed to pay him all the sum at the time.

Berniece Julien is known as the wife of the famous model, Tyson Beckford. The duo is living happily in New Jersey.

Jordan Beckford is the first son of Tyson Beckford. He lives with his father and stepmom in New Jersey.