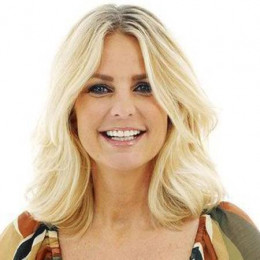 A Swedish television personality living and working in the UK who is mainly famous for TV-am weather presenter. She completed her college degree from Secretarial College. English, French and Swedish are some of the language she can speak very fluently. Interesting fact is that she is granddaughter of Swedish opera singer whose name is Folke Jonsson. In 1988 she started her career working as worked as a secretary and from 1989 she started her career on television from TV-am. In 1998 she had interviewed former British Prime Minister whose name is John Major which is one of her memorable work.

She was involved in controversy when she mentioned in her autobiography that an unnamed television presenter had raped her earlier in her television career but she never charged any kind of police case. Talking about her personal life, she had many ups and downs during her married life. She has been married thrice till date and her name has been linked with many celebrities. She had affair with more than half a dozen guys. She is a mother of four children.

Professionally he is TV cameraman. Together they were parents of a son. But after a few years later she had an affair with Gladiators cameraman Phil Piotrowsky which resulted their divorce.

They first met each other from the set of Mr. Right, a 2002 reality television show. He was winner of that show. Together they are parents of one daughter. Reason behind their breakup is still unknown.

Occupationally he is American advertising executive. Together they are blessed with two children. Among his children he adopted Ulrika's second child with the consent of her biological father.

He is the eldest child from her first husband.

Actually she is daughter of Hotelier Marcus. She is now adopted by her present step father.

She is very beautiful and gorgeous. She was born during Ulrika's second husband.

He is very cute and adorable. He is the youngest son of the family.