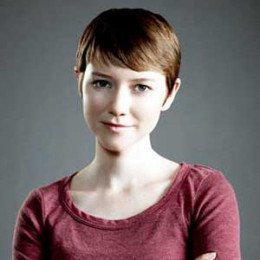 Valorie Curry is one of the young television and film actress best known for playing the role of Emma in the series The Following. Her acting credits include the series Veronica Mares and House of Lies. She also featured in the movies like The Twilight Saga: Breaking Dawn 2 and Blaire Witch. Curry is a meditation and organic food freak and believes in healthy living.

Curry is the youngest of three children. She grew up in Orange County, California and graduated from Sonora High Schoo in La Habra, California in 2004. She attended Fullerton State where she received a degree in theater.

Curry has worked with The Second City and Phantom Projects theater groups, performing roles such as Jennie Mae in The Diviners and Monique in Out, Out, Bried Candle!. She also played roles in Oklahoma!, Bus Stop, How To Succeed in Business Without Really Trying and The Diary of Anne Frank.

She started with the role of Jennie Mae in The Diviners and later appearing in the show Veronica Mars.

She landed the role of Charlotte in the Twilight Saga: Breaking Dawn- Part 2 and was also in Blair Witch and American Pastoral.

Curry has been in TV series with both Kevin Bacon and his wife, Kyra Sedgwick, in the series The Following (2013). She played the lead role for two seasons for which she gained a lot of attention and fame. Besides this, she has also featured in House of Lies, The Tick, Psych and much more.

Valorie not only established herself as a beautiful actress but also as a loving and caring wife. She is married to her loving husband and actor himself, Sam Underwood. These two met on the set of The Following, which was the turning point of her life, not only professionally but personally as well. The couple started dating after the end of their term in the series in 2015 and have been together since.

Her husband being an actor himself has been very supportive and has helped her in every aspect. This couple does not have any children to the date but has two pet that they love the most.

Valorie is an active actress and is a part of many movies and series, so probably earns a good amount of salary from her work. However, her actual salary and worth are still under the curtains.

Sam Underwood is a British actor. He is best known for his performance as Luke and Mark Fray in the television series The Following. Sam is married to actor Valorie Curry, his co-star in The Following. They both met on the set of series and soon after the end of the show, started dating and soon these two married.