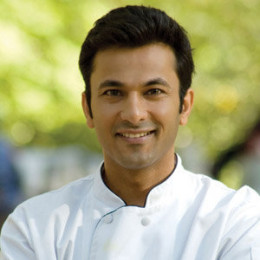 Vikas Khanna is an award winning Michelin starred Indian chef, restaurateur, and cookbook writer, filmmaker, humanitarian and the judge of MasterChef India Season 2, 3, 4, and Masterchef Junior. Khanna began developing recipes at a very young age and opened Lawrence Gardens Banquets to host weddings and family functions when he was 17. Khanna is the goodwill ambassador for Smile Foundation and supports the cause of malnutrition in India.

Vikas Khanna was born on November 14th, 1971 in Amritsar, India. He was born with a defect in his legs and hence he was unable to run till 13 years of age. He is the son of Davinder Khanna and Bindu Khanna. He has two siblings, an older brother named Nishant Khanna, and a younger sister named Radhika Khanna.

He was inspired by his grandmother who loved to cook, and he used her kitchen for initial training. He began developing recipes at a very young age and opened Lawrence Gardens Banquets to host weddings and family functions when he was 17. He graduated from the Welcomgroup Graduate School of Hotel Administration from Manipal in 1991.

Vikas has worked for the Taj, Oberoi, Welcome group, and Leela Group of Hotels. He is also well known to have worked with some of the most influential chefs of the world, most notably Gordon Ramsay, Bobby Flay, and Jean-Georges Vongerichten.

Vikas stated that he is single and it was explicitly mentioned within the Hindustan Times that he is proud to call himself single. However, he is hoping to have a good family one day and therefore he is waiting for a perfect time to get married.

Vikas has not mentioned anyone as his spouse as he claims he is not ready to be in commitment till today. Vikas has not been spotted with any person as his girlfriend and he also states the girls with whom he is close with are all his good friends. He is currently settled in New York City.

Vikas Khanna's net worth is estimated to be $76 million. His source of income includes his salary and earnings from his career as a chef, restaurateur, cookbook writer, filmmaker, humanitarian, as well as judge of a reality show.