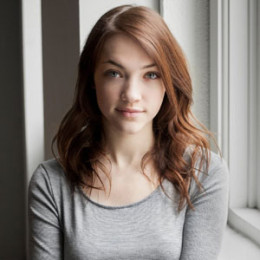 Violette Bean is an American Television and film actress recognized for her role in CW's hit The Flash. It was her outstanding performance which got her opportunity to play in an array of films as well as Tv series. Bean is dating EyeLid Kid since 2016. Not only in a relationship, the duo is also merged in their career. They worked together in the music video Landscape.

Violett Beane was born on May 18, 1996, in St. Petersburg, Florida. She grew up in Austin, Texas. Beane completed her education with Theatre course in Austin.

Beane made her first debut in 2015 in the HBO TV series Leftovers with a recurring role. The same year she was cast in CW productions The Flash as Jesse Chambers Wells. Her fame reached the height of success through CW’s drama.

Afterward, she made her big screen debut with the horror film Flay. In 2016 she returned as Jesse in season 3 of the show. She then starred in Indie movie featuring Michael Ian Black and Missi Pyle.

Following the Flash, Violett featured in the documentary Tower in 1966, focusing on the University of Texas at Austin, the first mass school shooting in the US. In 2016 Slash and Tower was premiered at the South By Southwest Film Festival.

Besides acting, Beane also featured in the music video Landscape. It was her first directorial venture; however, it’s a lesser known fact. The band got critical acclaimed plus numerous fan followings for their mesmerizing performance.

The beautiful actress Violett is currently dating Eyelid Kid. Paul Grant is the original name of EyeLid Kid. Her boyfriend is singer and musician by profession. The couple started dating since 2016. Seems like the duo shares a strong bond and spends a quality time together. The duo also worked together in the music video Landscape.

The 21-year-old actress Beane makes quite a good amount from her career. She is a versatile personality who successfully explored her talent and abilities. She earns more of her income from acting. As of 2017, she has accumulated an estimated net worth of $1 million.