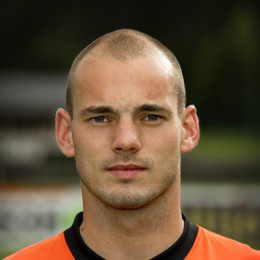 A dutch professional football player who played a key role in keeping Netherlands to a runner-up finish at the 2010 FIFA World Cup. He plays from the position of the midfielder. He played for modest club like Real Madrid from 2007 to 2009 and now plays as captain for the Turkish club Galatasaray. He began his youth career from Amsterdam club Ajax at the age of 10 years old. He started his professional career by signing for Ajax at the age of 17 years old.

Regarding his marital relationship, he is happily married to his girlfriend. He had been married previously but the marriage was unsuccessful. He is the father of one son from his previous marriage. It is said that his affair with another woman has been the reason for their divorce but the actual reason has not been yet disclosed. He is currently married to Spanish model and actress. There has been no report of any conflict and extramarital affair from his current marriage.

Dutch professional football player Wesley Sneijder was born on 9 June 1984 in Utrecht, Netherlands to the family of Barry Sneijder and Sylvia Sneijder-Thiele.

He has two brothers. His elder brother Jeffrey Sneijder was born in 1982 and the younger one Rodney Sneijder in 1986; both of them are soccer players. His father was also a player and his younger brother played for the Scottish club named 'Dundee United'. 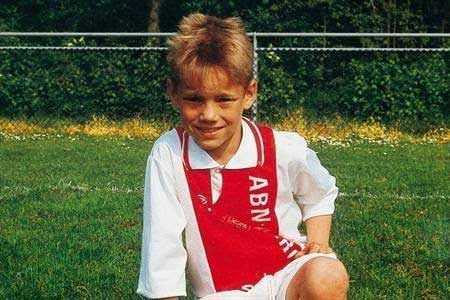 As a young boy, Wesley represented various teams for the Netherlands. He was regular in Dutch national team making a debut in April 2003 at 18 years of age.

Following the footsteps of the elder brother, he joined AFC's youth academy and signed for Ajax. He scored his first goal for Ajax in March 2003.

Sneijder scored his first Champions League goal against AC Sparta Praha in September 2005. He was second of three Dutchmen to have a contract for Real Mardird during the 2007-08 season with Arjen Robben and Royston Drenthe.

Ajax agreed to sell Sneijder to Real Madrid for €27 million on 12th August 2007. It made him one of the expensive Dutch footballer.

He was given number 23; the number previously owned by David Beckham. He won the first La Liga match for Real Madrid against Atletico Madrid. During a game in August 2008 at the Emirates Stadium against Arsenal, he got a ligament injury after a collision with Abou Diaby that made him take a break from the game for three months.

He became the new number 10 when Robinho left the club and joined Manchester City for €42 million.

He was sold to Internazionale for  €15 million on 27th August 2009. He extended his time with Inter signing a five-year contract; being in the club till 2015.

He joined Nice on a free transfer from Galatasaray on 7th August 2017. He made 3 appearances he made a contribution in a UEFA Europa League match against Lazio assisting Mario Balotelli for a goal.

After being separated from Nice, he joined Qatari Club Al-Garafa on 9th January 2018. Being the captain of the team, he assisted the league 2-1 to win at the Hamad bin Khalifa Stadium against Al Ahli Doha. 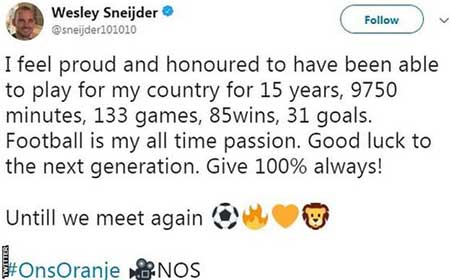 He came up with the decision after discussing with Netherlands manager Ronald Koeman, as he wanted a fresh start with younger players.

Sneijder is so busy in his professional career that he's yet to reveal details about his current net worth. His net worth and current salary are under review but he's regarded as one of the richest football players in the world.

Dutch magazine named Voetbak International conducted a poll to determine the best Dutch free kick taker in October 2008. It was not the matter of surprise that he received an amazing 70% votes with Robin van Persie who became second with 21% of the vote.

He was declared 'the best player of the 2009-10 season by Goal.com. He became the top assist provider in 2009-10 UEFA Champions League and Best Goal of the Tournament in the 2008 UEFA European Championship.

Sneijder married his first wife Ramona Streekstra on 18 June 2005. The couple maintained their relationship for about four years welcoming their first baby, Jessey Sneijder on 4th September 2006. They divorced on 22 January 2009. 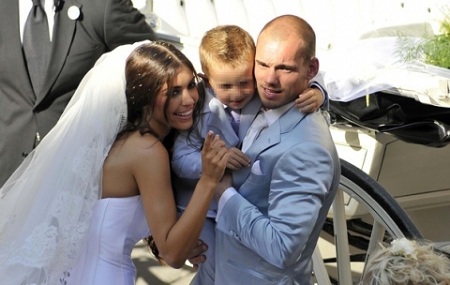 Wesley Sneijder and Yolanthe Sneijder-Cabau enjoying their wedding with a son from his former wife, Source: Ezinemark

It was the same year he started dating his future wife Yolanthe Sneijder-Cabau, Dutch-Spanish actress and presenter. Being in a relationship for almost a year, the pair married in a civil ceremony in Amsterdam on 7th April 2010 and then in a church ceremony in Italy.

The couple is blessed with a baby boy, Xess Xava Sneijder. Wesley is living a happy family life with his kids and wife.

She is the mother of his only son. They divorced due to some personal conflict between them. Their pictures can be found in different sites.

Occupationally she is Spanish-Dutch actress and television host. Their pictures during marriage ceremony can be found in various sites.

He is the son from his first marriage. His pictures along with his mother can and father can be found in different sites.