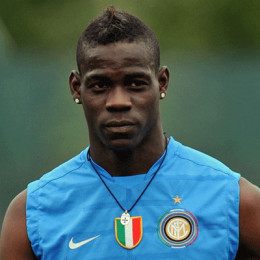 Mario Balotelli parents are immigrants of Ghana who moved to Italy. He was born in Italy. He was given to the Balotellis as a foster care mandatory act by his parents. He gained his identity as Mario Balotelli and is currently an aggressive and star footballer in the history of European football scenario. He plays in Barclays Premier League for Liverpool F.C.

Mario Balotelli has a long dating history and has been booked by referees and match officials often for aggressiveness or showcase of dissatisfaction against referee decisions.

He is the cool type of guy who maintains an attitude, though his charity-centered activities have been publicized from time to time on the Internet.

He engaged to Belgian girlfriend Fanny Neguesha in March 2013 but they separated in 2014.

His former girlfriend Raffaella Fico gave birth to their child, a daughter named Pia Balotelli on 5 December 2012. He became a father for the second time on 28 September 2017. He has a son with a mystery girlfriend.

Balotelli holds a net worth of about $60 million as of 2019. He signed a $36 million deal with Manchester City.

Mario Balotelli Barwuah was born on 12 August 1990 in Palermo, Italy.