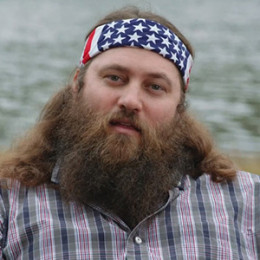 Willie Robertson is an American TV personality, businessman, outdoorsman, hunter and an author known for his appearance on reality TV series Duck Dynasty. Willie is the son of Phil Robertson and Marsha Kay Robertson and nephew of Si Robertson. He is currently CEO of the company Duck Commander, a company invested by his father. Willie has a bachelor's degree in health and human performance with an emphasis on business from the University of Louisiana-Monroe. He is famous for his beard and Bandana.

Willie Robertson is married to Korie Robertson whom he married after three years of dating. They married in 1992, a year after completing high school studies and say that they do not regret marrying at such a young age. They have five children, two sons, and three daughters. Korie also has a foster child from Taiwan named Rebecca. The couple has biological as well as adopted children.

Korie is a reality television star on Duck Dynasty. She is a wife of CEO of the same Duck company Willie. They are happily married for 24 years and are parents of 6 children.

John is the eldest son who attended Ouachita Christian School. He is a part of Duck Dynasty and his graduation and marriage to his Mary Kate McEacharn was shown in season eight. They married on June 28, 2015. He is attending Liberty University.

Rebecca is eldest among Wille and Korie children, she is their foster daughter. They were her his family while she was an exchange student fro Taiwan.

Sadie is their second biological daughter and third child. She is also the part of Duck Dynasty and is senior graduating in the class of 2016. Sadie has her own line of dresses in collaboration with Sherri Hill and modelled them during New York Fashion Week. She was a celebrity competitor on Dancing with the Stars: season 19 and has also appeared in the film God's Not Dead 2.

Bella is the youngest child of this couple. She first appeared in Duck Dynasty in 2012 in an episode called "Sauvignon Beard".