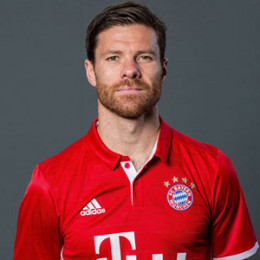 Xabier Alonso Olano commonly known as "Xabi" is a skilled Spanish football player who plays for FC Bayern Munich, a German club and the national football team as a central midfielder. His father name is Periko Alonso, a footballer who featured in the national team, winning over 21 caps. He began his professional soccer career with Real Sociedad in 1999. He was named Spanish Player of the Year in 2003 and with the national team he has won a World Cup Championship in 2010.

He is a married man. He married his girlfriend with whom he stayed in relation for a long time. The couple has three children. They are often spotted together in tournaments, weekends, shopping malls and restaurants. He has been very loyal to his wife and loves his wife and children very much. He was once rumored for leaving his current club.

Spanish former footballer Xabi Alonso was born on 25 November 1981 in Tolosa, Gipuzkoa, Spain to the family of Isabel Olano and Miguel Angel Alfonso. His birth sign is Scorpio.

He has two brothers Mikel Alfonso and Jon Alfonso. 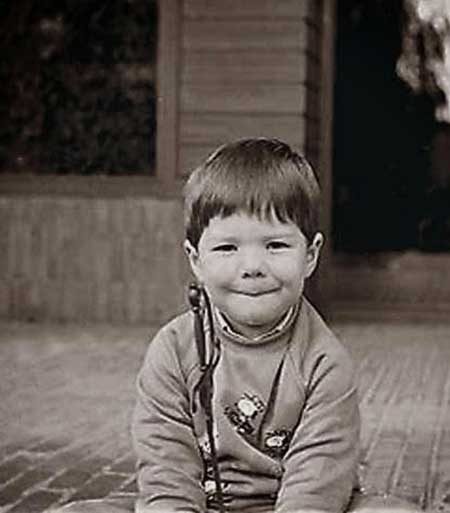 His father also made quite a name in football. He won La Liga two times with Real Sociedad and the third time during the time in Barcelona. He won 21 caps during his entire football career.

Xabi Alfonso was raised in the city of Barcelona for six years and moved to San Sebastian. He developed interest once he started playing at Playa de la Concha. His father sent him and his elder brother, Mikel to practice football together.

When he was 15, he went to the Irish town of Kells, County Meath to learn the English language.

Alonso, 36, began his professional career at Real Sociedad. He made an impressive team debut in the team of his home province at 18 years of age. He played his first senior match against Logrones in a Copa del Rey in December 1999.

He received much praise for his performance in the team's success. Spanish sports magazine Don Balon awarded him with the Best Spanish Player award. In addition to it. Alfonso contributed the team's goal tally, scoring 12 goals in all matches. 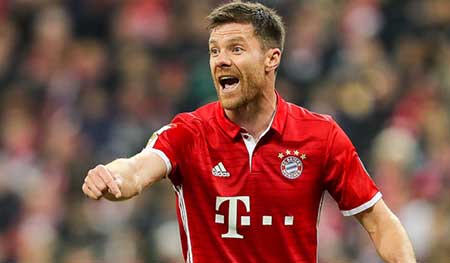 Xabi Alonso announced his retirement from football after the 2016-17 season, Source: Extra

He earned a national reputation and Inaki Saez. The coach of the Spanish team called him up for La Seleccion.

He joined Liverpool along with Luis Gracia from Barcelona in the 2004-05 season. He went on providing the contribution for the club as he scored his first goal at Anfield with a 2-1 win against Arsenal.

He appeared and played his best in all of Liverpool's games in the Champions League. He won his first FA Cup winners' medal in the 2005-06 season.

He signed a five-year contract with Liverpool on 8 June 2007. As per the statistical analysis, he became the first league player to finish 1,000 successful passes in the season.

He joined Real Madrid for £30 million on 5th August 2009. His departure became one of the reasons behind Liverpool's poor run in the following seasons. He scored three goals in his first season itself that made him one of the "most consistent" players in Real Madrid.

He received the nominations in the LFP Awards by the Liga de Futbol Profesional, the Spanish Football league. He was nominated in the category of Best Midfielder with Xavi and Javi Martinez.

He joined Bayern Munich with a two-year contract on 29th August 2014 but the fee was kept secret. Following the deal, he made a debut at Schalke 04 in a 1-1 draw.

He made his international debut for his country in April 2003 against Ecuador with a 4-0 win. During his entire international performance, he won Euro Cup 2008, Euro Cup 2012, and the 2010 World Cup.

He won his 100th cap for his country in the 2012 Euro quarter-final against France.

Though Spain was among the favorites in the 2014 World Cup, they couldn't perform well. They had a disappointing campaign that concluded in the first round.

Alonso retired from the international football on 27 August 2014. Still, he became the seventh-most capped player in the nation's history winning a total of 114 caps in his entire international career.

Alonso has an estimated net worth of about $20 million at present. He amassed the huge fortune playing with Real Sociedad, Liverpool, and Real Madrid and by endorsing brands like Audi and Adidas.

Though his personal and professional life is open in media, he hasn't mentioned details about his worth including his houses and cars.

Xabi Alfonso is often regarded as a friendly and quiet person. He is living a happy married life with his wife Nagore Aranburu.

The couple often hangs out together. He enjoys his post-retirement period spending amazing family holiday with his lovely wife. 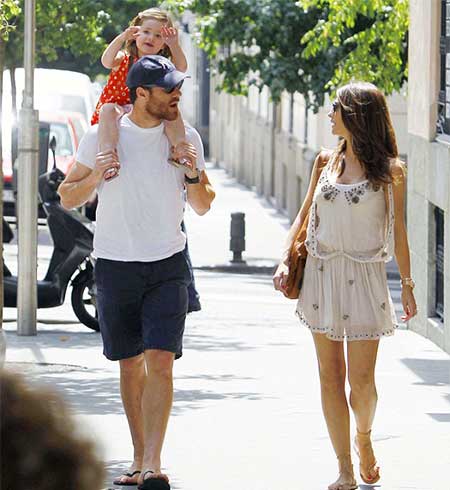 Xabi Alonso enjoying a day out with his wife and kid, Source: Daily Mail

Apart from all, he is a keen supporter of a Meath Gaelic football.

She is a tall, fair and beautiful lady who knew her husband from a long time. They dated for more than 4 years and later got married.

He was born safe and healthy. He plays soccer with his star player father in his free time.

She is a beautiful and adorable child whose eyes are pretty much similar as of her father.

She is the newly born child in Alonso family who is often seen lying in her mother's arm.