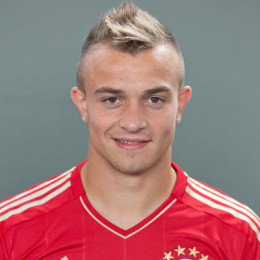 A professional Swiss football player who plays both for the Swiss National Team as well as for the football club Inter Milan. His major position is that of a midfielder and is known best for his speed and agility. He hold dual citizenship of both Albanian and Swiss. During his career he has played for many modest clubs like Bayern Munich, Inter Milan. He is Muslim but he celebrates Christmas as well. He is called as Alpine Messi and also Magic Dwarf for his excellent ball tackling skills and excellent vision.

Xherdan Shaqiri was born on 10 October 1991 on Gjilan, SFR Yugoslavia to Kosovar Albanian parents Isen and Fatime. He emigrated to Switzerland in 1992 with his parents and three siblings; a sister Medina Shaqiri and two brothers Erdon Shaqiri and Arianit Shaqiri. 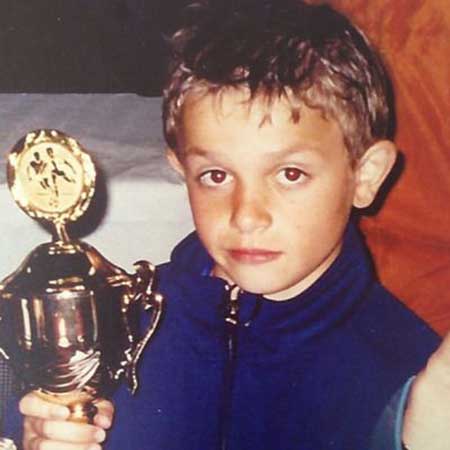 He has multiple citizenships including Kosovo, Albanian, and Swiss. He acquired Swiss citizenship via naturalization.

He began his professional career at FC Basel. While playing for Basel, he competed in the Under-15 Nike Cup in 2007 and was declared the best player of the tournament.

He signed a two-year contract with Bael on 2 January 2009 and made his debut in July the same year against FC St. Gallen at the AFG Arena.

By the end of the 2011-12 season, he won the double of the League title and the Swiss Cup.

Stoke signed a deal with Shaqiri in August 2015 with the regular fees, personal terms and undergoing medicals.

After 11 days of his contract, he made his debut with a 1-1 draw with Norwich City at Carrow Road. He made headlines and became the matter of controversy when he spoke in an interview with Swiss magazine Schweizer Illustrierte in which he said the teammates lack a quality.

He played 38 times in 2017-18 scoring eight goals in the EFLChampionship.

Shaqiri, 26, made an international debut in the Swiss under-21 in November 2009 against the Turkish under-21. The Swiss team made a 3-1 win in a 2011 UEFA European Under-21 Championship qualifier. 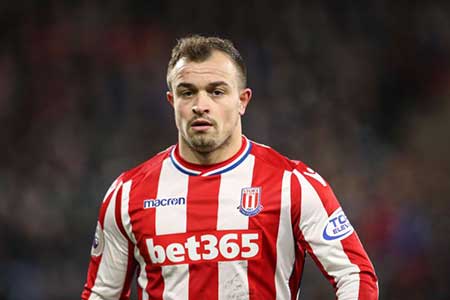 He gained promotion to the Swiss senior team in 2010. He made his senior debut against Uruguay with a 1-3 loss. He represented his country at the 2010 and 2014 FIFA World Cups and UEFA Euro 2016.

He received the Swiss Golden Player Award as "SFAP Golden Player" and "Best Young Player" in 2012. During his 2012-13 season in Bayern Munich, he became DF-Pokal top goalscorer and top assist provider.

He earned over 70 caps for Switzerland since he started his international career in 2010.

Shaqiri has a huge net worth but it's still under review. He transferred to German club Bayern Munich from the very first FC Basel with a fee of  $13.14 million (€11.6 million).

In January 2015, he transferred to Italian club Inter Milan with a four-year contract for $16.9 million (€15 million).

You May See; Carol Vorderman

The Stoke forward prefers to spend much of his fortune with his boot collection. The star who earns $83k (£65,000) a week said that he spends much on shoes than other expenses.

Shaqiri is a proud Muslim. The sports icon is not married yet and most probably single at present.

He is very much open about his professional career but he never spoke a word when it comes to his family life and affair.