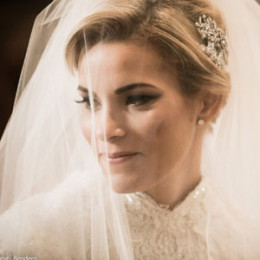 Yainee Alonso is popularly recognized as the wife of American professional baseball third baseman, Manny Machado. The couple first introduced by the Alonso brother, Yonder Alonso. They tied the knot in 2014 at an intimate ceremony, some popular baseball player were evidence of their marriage. Her husband, Machado is considered as one of the highest-earning American baseball players with an estimated net worth of $17 million.

Yainee Alonso was born on Havana, Cuba on 25 November. She is Cuban and belongs to the Caucasian ethnicity. Though her mother tongue is Spanish, she can fluently speak English.

Alonso was raised along with her brother, Yonder Alonso who is a Cuban professional baseball first baseman. In 2008, Alonso joined University of Miami and earned her bachelor degree in Psychology in 2012.

Alonso is interested in Baseball but she never takes it as her career. However, her husband, Manny Machado is a professional baseball third baseman and shortstop for MLB. In 2013, he earned a spot on the American League All-Star team and the same year, he won a  Gold Glove Award and 3 AL Platinum Glove.

Machado confirmed his engagement with Alonso in February. The duo exchanged a vow in the November 2014 at an intimate ceremony in the presence of their closed ones.

The duo first introduced by Alonso brother, Yonder Alonso who shared a good bond with Machado, but the couple gets closer form the Miami sports community.

Once in an interview with Baltimore sun, Machado revealed their relationship blossomed due to how close-knit sports communities are in Miami, Florida.

“That’s the thing about Miami people, Guys that live in Miami ... I might live in Hialeah and he might be from Key West, but you’re from Miami, so even if we don’t know each other, we know the name and, automatically, it’s like we’ve known each other for years.”

Manny Machado was just 20-years-old when the pair decides to take their relationship to next level. Currently, the duo is living their blissful married life in Baltimore. They have no children.

Her husband Machado shared an image of their wedding wishing a very 'Happy Birthday' to his lovely wife via Instagram posts.

My , not a day goes by that I don’t thank God for putting you in my life. Since day one that we laid on each other we knew that nothing or no one will ever get in the way of our . On this special day of yours that God brought you into this I’m blessed and honored to be standing next to such a strong, intelligent, special and of course most beautiful person I’ve ever seen. I don’t know what I would do without you in my life you are my world.... HAPPY BIRTHDAY!!!! I love you boo

Well, the longtime couple is doing quite well their married life.

The two were together celebrating New Year 2019.

Yainee Alonso estimated net worth hasn't revealed yet but her husband, Machado has earned a quite impressive sum form his baseball career.

His estimated net worth is $17 million and as per some online sources, his net worth is risen by 92% compared to a few years back. His annual salary is $11 million.

Yainee and Manny are together since 2005. Manny Machado is an American professional baseball third baseman and shortstop for the MLB.