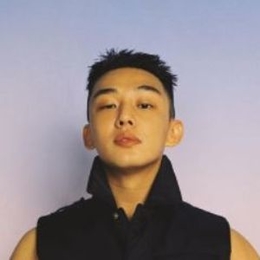 Yoo Ah-in is a South Korean actor, gallerist and creative director. Yoo skyrocketed to fame for his breakthrough role in the 2010 television series Sungkyunkwan Scandal and Descendants of the Sun.

The actor, Yoo Ah-in's love life has always been a matter of interest for his fans. The dating rumors between actress Song Hye-Kyo and Chicago Typewriter star Yoo Ah-in's surfaced after her post together along with her dog in 2019. 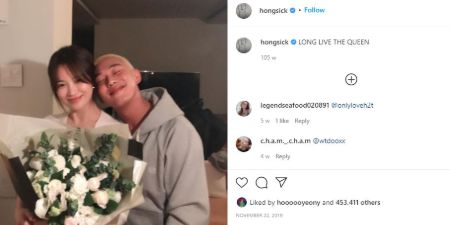 On May 1, 2021, Song Hye Kyo sent her followers talking when she took to Instagram stories to share a photo of a coffee truck captured at the set of " Now, We Are Breaking Up." The post captioned with "Ha... Thank you. Mr. Hong Sik."

Most recently, Song also shared an adorable photo of them on Instagram, making fans wonder about the relationship. The duo has yet to work together on a film, a drama, or any project. 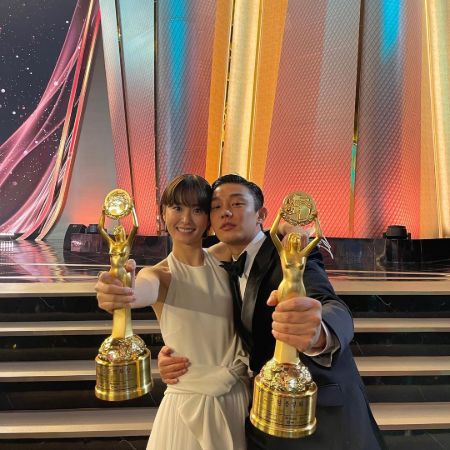 Yoo Ah-in with his Song Hye Kyo after winning the award. SOURCE: Instagram(@hongsick)

Not to mention, Yoo, to show his support towards Song Hye Kyo on August 17, 2021, posted the latest cover of Vogue Korea. He wrote," Congratulations. A new start! An even newer Song Hye Kyo." Yoo then responded with a series of hearts.

All in all, the interaction between Yoo and Song might show a good friendship bonding. But it doesnt stop fans from speculating regarding their relationship.

Yoo Ah-in made his debut in film with a low-budget indie film, Boys of Tomorrow, as young man Jong-Dae. In 2008, Yoo starred in the Strongest Chil Woo, which gave him further recognition from critics and viewers.

Check out the video of Yoo Ah-in and Park Shin Hye on their role in Netflix's series Alive.

Further, Yoo Ah-in appears on dark fantasy mixed Netflix Television series Hellbound in the role of Jeong Jin-Soo since 2021. He shares the screen alongside a cast of Kim Hyun-Joo, Park Jung-min and Won Jin-A.

In addition to the film, Yoo had been an investor and business partner of TMI, a Korean healthy fried food restaurant in Itaewon, from 2015 to 2017. The 35-years old was chief editor of Tom Greyhond's fashion magazine Tom Paper for two years.

Moreover, Yoo Ah-in in 2020 had certainly made several hit films like Alive even when the world was stuck with a pandemic. Yoo's upcoming films in post-production are The Match, High Five and Seoul Vibe. The 1.81m tall star's net worth reportedly sits at $4 million.