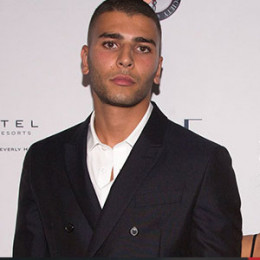 American model, Younes Bendjima came to prominence after dating the reality TV star Kourtney Kardashian. The duo was a tabloid sensation when they were dating.

Younes Bendjima was famously in a relationship with reality star Kourtney Kardashian whom he crossed path at Paris Fashion Week in 2016. The duo started dating eventually and shared a romantic relationship.

They were often spotted together in various travel destinations and at the 2017 Cannes Film Festival as well.

Moreover, the pair accompanied by Kourtney's three children on a vacation to Turk's and Caicos. They also visited Italy in 2018. The other places they traveled include Pacific coast in Malibu where they celebrated Kourtney's birthday and they went to Colorado River to celebrate Bendjima's birthday.

Don't miss: Is Kourtney Kardashian and Justin Bieber going to be married?

However, the duo broke up after two years of relationship. Rumors flicked that the break up was from Kourtney. The major reason for the break up is assumed to be Bendjima's disapproval of her showing her bare skin on social media.

Kourtney Kardashian reacts to break up with Younes Bendjima, Check out the video below!

Formerly, he was dating model Jourdan Dunn. They first met at the Met Gala in New York in May 2015. Their relationship was shortlived after which Bendjima dated Kourtney.

Younes Bendjima has an estimated net worth of $500,000 according to various sources. He earns a hefty amount of money through his modeling career as he is often associated with huge fashion houses and brands.

Moreover, He is a model associated with Next Model Management, he makes $330k a year. His salary can fall in the range of $109 to $421 per hour, varying from project to project.

Also Read: Kourtney Kardashian & Kendall Jenner Come out announcing they're Not Pregnant on 'Ellen' Halloween Special. Kylie's yet to confirm or deny the rumors!

The information about his properties is not available. But he owns a Mercedes G-class which costs around $200k.

Younes Bendjima was born on May 5, 1993, in Algeria. He was born to a restaurant owner. His parents parted ways while he was still at a tender age, after which his father relocated to New York, the USA, his mother moved to Paris, France. He spent much of his youth in New York, helping his father with the operations of the restaurant time and again.

He used to visit his mother in Paris over every summer vacation he had. Younes had an exhilarating childhood, traveling to different places at a very young age.