Home Article Kourtney Kardashian & Kendall Jenner Come out announcing they're Not Pregnant on 'Ellen' Halloween Special. Kylie's yet to confirm or deny the rumors!

Kourtney Kardashian & Kendall Jenner Come out announcing they're Not Pregnant on 'Ellen' Halloween Special. Kylie's yet to confirm or deny the rumors! 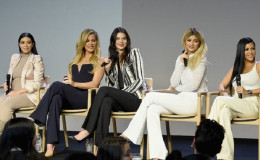 Kourtney Kardashian & Kendall Jenner Come out announcing they're Not Pregnant on 'Ellen' Halloween Special. Kylie's yet to confirm or deny the rumors!

The sexy super famous Kardashian sisters are never off the limelights and yesterday on Halloween night, one of the wannabe Kardashian sister, Karla Kardashian dropped a fake baby bomb! Confused right? If you watched yesterday night's Halloween special on The Ellen Degeneres show then you know exactly what we're talking about.

The Karla Kardashian persona of Ellen Degeneres who is really amazing FYI, was joined together by Kourtney Kardashian and Kendall Jenner on the show and both sisters confirmed that they're not pregnant!!

Kourtney Kardashian & Kendall Jenner Come out announcing they're  Not Pregnant on 'Ellen' Halloween Special. Kylie's yet to confirm or deny the rumors!

You all must have heard the rumors of Kardashian sisters rumors of pregnancy this year and their fans are beating their brains out to find out the truth. Well, the wait is finally over! All thanks to their less known fake sister, Karla Kardashian!

While Ellen appeared as Karla and revealed her baby daddy as the Jaleel O'Neal, fake cousin of Shaquille O'Neal, Kourtney and Kendall joined the skit and denied the rumors of them being pregnant. 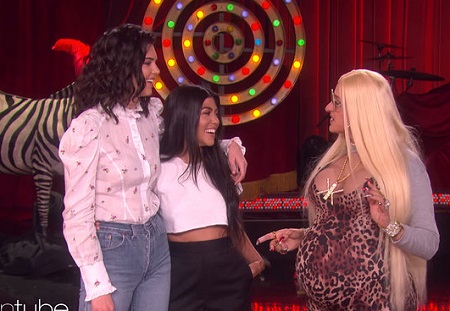 Karla says, Kourtney is also pregnant! and seconds later, Kourtney, the oldest Kardashian comes out asking her to stop making fake rumors about her pregnancy because she's not pregnant. Karla tries to get smart and tells that she meant Kendall Jenner. And as soon as she says that gorgeous Kendall joins the team and breaks the news that she's not pregnant either.

You can watch the full clip below:

And while fans were expecting Kylie Jenner to join the skit, which didn't happen and this is raising eyebrows that the youngest sister might be a soon-to-be mom!

That same night, Kylie posted pictures of her Halloween costume, wearing white mascara wearing a white outfit. Unlike other years, this time she posted only a close-up and her breasts looked really huge which adds up to the rumor that she might be pregnant with Travis Scott baby.

One fan speculated that since the rumors, she's not shown the pictures of her body and she's looking quite chubby indicating that she's super pregnant.

So, what to do you guys think? We all have our stakes high on this one. For more recent news and updates, keep following our page!!