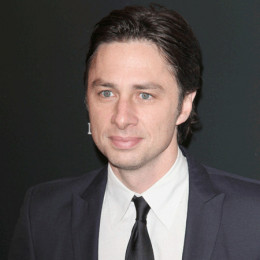 An American actor, screenwriter, director and producer who is well known for his role as Dr. John on the television show, Scrubs. He is son to Harold Irwin Braff and Anne Brodzinsky. When he was just 10 years old he was diagnosed with obsessive-compulsive disorder. In 1997 he graduated form the Northwestern University School of Communication. He debuted in acting career through 1989 CBS television series named High. He got more recognized after he did his role as Dr. John Dorian on the television series Scrubs for which in 2005 he was nominated for Primetime Emmy Award for Outstanding Lead Actor. He is also producer,director and actor of 2004's Garden State and the series "mixtape" won a Grammy for Best Compilation Soundtrack Album for a Motion Picture.

Talking about his personal life he has not married yet. It seems like the handsome versatile actor and director really likes to enjoy his single life rather than getting married. Looking at his relationship history he has dated no. of actress, singer and models. Currently his relationship status can be described as single because he recently broke up with his girlfriend who is fashion model.