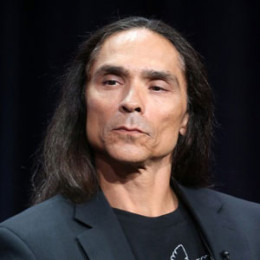 Zahn McClarnon is America born Lakota-Irish actor. His performance in the second season of the television series Fargo got him a wide recognition in the TV industry.

Tokiya-Ku McClarnon known by his nickname Zahn McClarnon was born on October 24, 1966. He hails from Denver, Colorado whereas grew up in Browning, Montana.

His father is Irish and mother Hunkpapa Lakota hence, he is of mixed descent. He grew up with his fraternal brother in Nebraska, South Dakota, North Dakota, Minnesota, Wyoming, Montana. McClarnon attended Omaha Central High School.

Zahn started his career at the Chanticleer Theater, a local production of Jesus Christ Superstar. He made his screen debut in 1992 with Tequila and Bonetti.

He got the credit for his role, Cheyenne reservation Chief of ITP in the long running series Longmire in 2012-2016. In 2015 he was cast in the hit series Fargo as Hanzee Dent which got him popularity.

The 51-year-old actor Zahn is a single man. He hasn’t revealed much about his love life or any affairs. As of now, he is quite busy and more focused in his career.

The skillful actor McClarnon’s income source is acting. He makes a decent amount from his career. His estimated net worth of 2017 is $700,000.