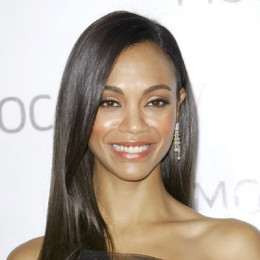 Beautiful and gorgeous american actress, model and dancer who is best known for her role in blockbusters movie like Star Trek and Avatar. She is daughter to Aridio Saldańa and Asalia Nazario. When she was just 9 years old her father died in and devastating car accident. She was ranked 3 in Maxim magazine's Hot 100 Women list in 2010. Beside her acting career she has been model for Avon, the Gap and Calvin Klein.

Talking about her relationship her name has been linked with many famous actors. She dated actor and CEO of My Fashion Database for 10 years and she announced that she was going to marry him but the relationship didn't go quite well and they split up. At last, she married a handsome Italian painter. The couples are now parents of three kids. Other information about her personal life has been kept confidential by the actress.

Zoe Yadira Saldaña Nazario was born on 19 June 1978 in Passaic, New Jersey. Her mother, Asalia Nazario is Puerto Rican while her father, Aridio Saldana was Dominican. She also belongs to Lebanese and Haitian descent. Her birth sign is Gemini. 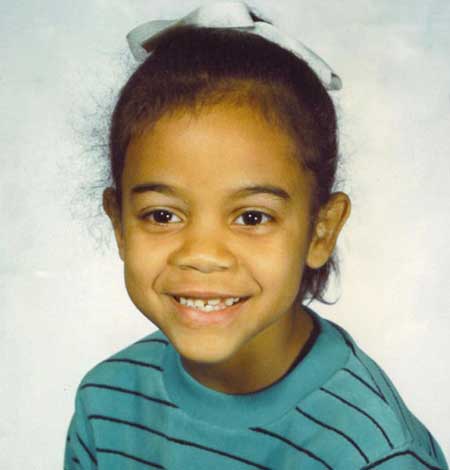 The family members shifted to the Dominican Republic once her father died in a car accident when Zoe was just 9 years of age.

She has a keen interest in dance since her childhood days. She attended the ECOS Espacio de Danza Academy because of her love for dancing. She began her career performing with the Faces theater group in Brooklyn in 1995. Her performance was basically focused on giving lessons to the teens on substance abuse and adolescent sexuality.

Saldana, 40, gained wide recognition from her fans as she performed in an episode of Law & Order that first aired in 1999. She performed in a movie for the first time in 2000 in Center Stage.

She also performed in the Britney Spears vehicle Crossroads; an American comedy-drama in 2002. The next year, she portrayed the role of Anamaria in Pirates of the Caribbean: The Curse of the Black Pearls.

Saldana performed in two high-profiled roles both in the year 2009. She played the role of Nyota Uhura in Star Trek that grossed $385.7 million in the box office worldwide. She starred as alien hunter Neytiri in Avatar that grossed $2.7 billion worldwide.

She revised her role as Uhura in Star Trek Into Darkness in 2013 collecting $467 million worldwide ranking 14th highest grossing movie that year.

In 2014, she played in some of the successful movies including Guardians of the Galaxy, The Avengers, and Iron Man 3.

In 2016, she appeared in the science-fiction sequel, Star Trek Beyond. Most recently, she performed in Guardians of the Galaxy Vol. 2, and Avengers: Infinity War. She's set to star in Avatar 2 in 2020 and Avatar 3 in 2021.

In 2009, she won Boston Society of Film Critics in Best Ensemble Cast in 2009 for Star Trek. Further, she was nominated in a number of awards including Teen Choice Awards, People's Choice Awards, Scream Awards, BET Awards, and Broadcast Film Critics Association awards for the same role. 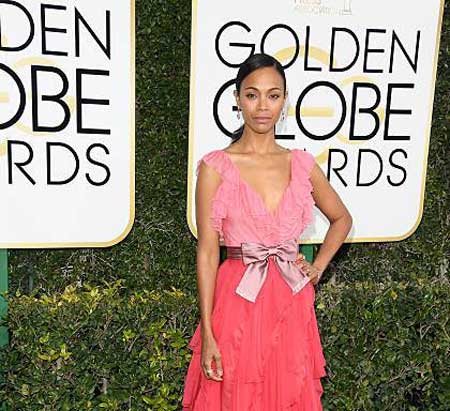 In 2011, she received Image Awards nomination for Outstanding Actress in Motion Picture for The Losers.

The next year, she was awarded a Teen Choice Awards and ALMA Awards for Colombiana.

Most recently in 2017, she won Teen Choice Awards in the category of Choice Movie Actress: Sci-Fi for Guardians of the Galaxy Vol. 2.

Being the part of some of the high grossing movies in past, she has certainly made a huge fortune out of it.

In 2016, she purchased an $8.7 million mansion in Beverly Hills; the mansion that previously belonged to fashion icon Kimora Lee Simons. The six-bedroom house was originally listed for $10.5 million.

Zoe is living a happy married life with an Italian artist Marco Perego-Saldana.

The couple tied the knot in London in June 2013 in an intimate ceremony just months after breaking up with on-and-off boyfriend Bradley Cooper. 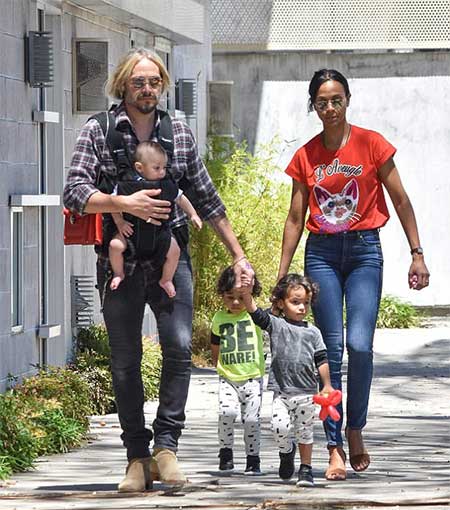 Zoe Saldana with her husband and three kids walking around the way, Source: Latina

Saldana previously started dating her former love Cooper before New Year's Eve in 2012. They dated each other for as long as a year.

In June 2010, she was engaged to her longtime boyfriend Keith Britton. He is an actor and the CEO of My Fashion Database. The couple announced their separation in November 2011 after 11 years of being together.

After dating 1 year both artist and actress married secretly in London in presence of their family. Together they are parent of twin sons.

He is cute and adorable son of the couple. His picture along his mother can be found in different sites.

He is cute son of the actress. His picture along his brother and mother can be found in different sites.