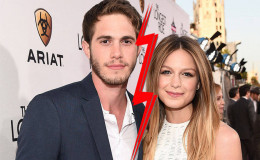 After their beautiful marriage, a year before Melissa and Blake have decided to split up as Melissa has filed for divorce during Christmas this year. What is the reason behind their split? Let us find out.

Melissa Marie Benoist is an American actress who is best known for her role in CBS/CW drama Supergirl. She is a very smart and beautiful actress and she is what we call the perfect example of 'Beauty with Brains.'

However, today let us talk about her personal life. She was married to Blake Jenner in 2015 after dating for quite a long time. However, the marriage has now ended as the couple has filed for divorce.

Melissa Benoist filed for a Divorce

When everyone was celebrating Christmas with their family and friends, Melissa was not able to enjoy as she was trying to save her marriage with husband Blake but in the end, nothing worked out and she filed for a divorce .

The news came as a very big shock to all the fans around the globe as the couple was like the cutest couple around and no one would even think that things were not working out between them.

Similarly, their social media account has been flooded by fans commenting that they should not split up. Many fans are heartbroken due to the fact that the lovely duo has to part ways.

To my best friend and my partner in crime, I love you and wish you the very best of birthdays of today. @Melissabenoist Thank you for being the best person I know.

According to our sources, the reason for their separation is irreconcilable differences. The couple is also not seeking for any type of spousal support from each other.

The two of them has now decided to split up after one year of their marriage. The couple married each other on March 2015. Blake and Melissa first met each other on the sets of 'Glee.'

After confirming their relationship they got engaged to each other in July 2013.

Will Melissa reconsider her decision of divorcing Blake?

Fans all around the globe want her to reconsider her decision about divorce, but Melissa hasn't said a word about it as of yet.

Blake is also keeping his silent on this issue. What must Melissa be thinking right now and how is she doing right now are the two questions that people are asking to both of them.

After the months of speculations, Melissa has finally confirmed dating her co-actor from the show 'Supergirl', Chris Wood. The couple was captured getting cozy and sepnding quality time with each other in Mexico.