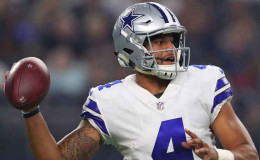 It's hard for a man to stay single with all the beauty around, especially for a celebrity who is constantly approached by women.  And when you're the quarterback of the Dallas Cowboys, the perk of beautiful women chasing you come with it.

The fact that you're going to have some beautiful young ladies around you is certain to grab your attention and it won't be wrong to say that Dak Prescott has had his share of women in his years as a quarterback. Wanna know more about his dating life and girlfriend? Let's go further:

In 2018, it is reported that Dak is seeing a certain Las Vegas waitress who he was spotted with several times trying to elude the eyes of media. It was reported that this secret love of Dak is a former Arizona Wildcats' cheerleader, Rosette Abud.

The rumors about them seemed to line up with all the other reports about him and Rosette hanging out on St. Patrick's Day weekend. They seemed to be quite interested in each other.

Dak Prescott was also seen in San Diego hanging out with her and he's been spotted with her more than once. According to the news, this weekend in San Diego isn't the first time they've hung out as she was also with Dak at his teammate Ryan Switzer's wedding in March 2018.

Dak is all about his new girl, and he also brought her along to the Mexican versus Croatian soccer match at AT&T stadium. Dak seems to be having a super fun offseason and it seems he's loving his life as America's QB.

Dak with Rosette at the Mexico vs Croatia game
Source: Sports gossip

But there are also rumors on social media that Dak is going in between women and that he could be telling one girl one thing, and then just keeping his options open when out with others. Either way, it seems he wants to keep the relationship on the down low, unlike his past relationships.

While his personal life has been a hot topic in the media these days, Prescott hasn't revealed about his current girlfriend in mass. While most think of the star dating someone secretly, we hope to know more details about his private life very soon.

Dak Prescott Past Relationships And Affairs

Talking about his previous relationship, he had affair with Kayla Puzas in 2014. She is a graduate of a Georgia Southern University.

Next came Yasmine Nicole who he began dating in September 2016. Nicole works as a model for Playboy and she graced her social media with hints about their relationship. She posted a picture of her at one of Daks game on her Instagram subtlely stating that she was there for him.

I’m only really watching one player

Although it seemed things were good between them, the pair eventually broke up and later Yasmine said that there is no bad blood between them. When a fan asked What had happened with her and Dak, Yasmine replied:

"Nothing 'happened. Bad timing I guess? He is a great guy but we are both young and working on our careers. He will always be a friend to me and someone I care for."

Nevertheless, of all his affairs, we hope he finds a good woman and settles down and we pray that all this doesn't distract his attention from his game.