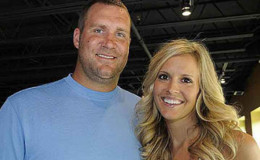 When two people are destined to be together, their first meeting feels like something out of a scripted movie. Ben Roethlisberger never thought he'd meet the love of his life while he was casually meeting a fan.

When two people are destined to be together, their first meeting feels like something out of a scripted movie. Ben Roethlisberger never thought he'd meet the love of his life while he was casually meeting a fan.

Ben's professional career is brilliant for everyone to see. Today's let dig up the details of his personal life, including his blissful married life, his multiple children, as well as the love story that began it all.

Ben Roethlisberger is married to his beautiful wife Ashley Harlan. The couple tied the knot on 23rd June 2011 at Christ Church at Grove Farm in Ohio Township, Pennsylvania.

After exchanging vows, the newly wedded spouses celebrated with family and friends at the Convention Centre named David L. Lawrence. There were reportedly 600 guests who partied all night in the Spirit of America Ballroom. 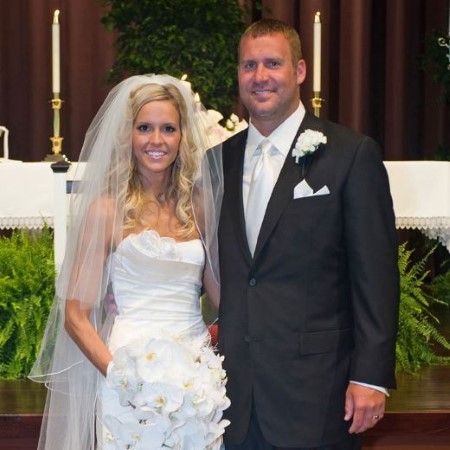 Ben Roethlisberger and Ashley Harlan during their wedding
Source: Pinterest

Earlier, Roethlisberger and his soon-to-be-wife made a special request for their wedding day. Rather than gifts, the couple wanted the guests to make donations for Ben's charitable effort called the Ben Roethlisberger Foundation.

"I don’t know if it’s ever been done before, but it’s something I wanted to do and she’s on board."

The NFL star added they're just hoping that people who come to the wedding give a dollar or a thousand dollars or whatever they wish to, and at the end, they'll put it all together.

The pair would then write a check which will be submitted to Ronald McDonald House and Children's Hospital putting everyone's name who was kind enough to make a donation.

Ashley got pregnant just after their wedding. She gave birth to their first born, Benjamin in November 2012.

"It puts things into perspective. For me, it’s like what’s important. You don’t really know love until you have a child and it’s pretty cool. I got up early and he was awake so we were playing this morning before I left to go to practice. The changes you see every day are just awesome."

The pair welcomed their first daughter and a second child named Baylee Marie two years later on 19th March 2014. Moreover, the lovebirds' third child and second son Bodie was born on 26th May 2016.

#TBT - May 26, 2016: Bodie, the newest member of #SteelerNation, was pretty excited to watch the @penguins in the Playoffs. #Pensfamily  pic.twitter.com/6w7MT28pnd

The entire family of five look adorable together while the love between Ben and Ashley appears to be growing each day.

The couple met for the first met in 2005 in a rather intriguing manner. Ben was in the campus at San Vincent when a fan came to him and introduced himself. The two of them started talking and Roethlisberger met the fan's sister who happened to be Ashley.

Roethlisberger was instantly fascinated by the lady. He thought she was cute and subsequently asked her out on a date. The following five years, they got to know more of each other while their relationship seemed to be on and off. 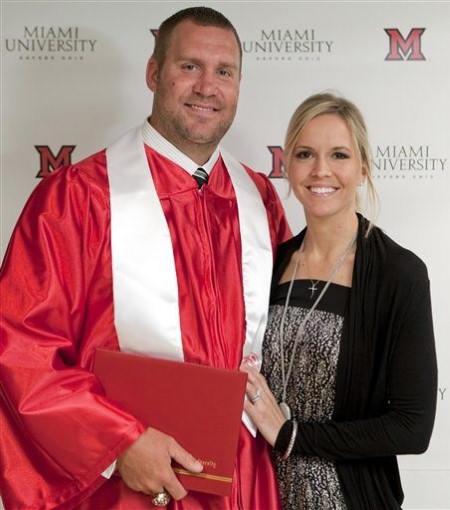 Speaking to the Post-Gazette in 2011, Ben said:

"We were kind of on and off for five years — almost six years now — so I’ve known her for a while. It’s not like a random new person. We dated a while ago; we have been friends ever since."

The same year, Roethlisberger revealed his plans to marry Ashley. There were soon speculations that the couple was engaged which prompted his fans getting curious to know more about this lady who won his heart.

The details about Ashley soon followed in the media. The Post-Gazette revealed she graduated from Laurel High School where she starred as a softball star. Later, Harlan graduated from St. Fran University in Loretto Cambria County.

Ashley received her bachelor's degree in health science and a year later, she earned a master's degree in physicians assistant.

In April 2011, Roethlisberger opened up about having to shield his fiance from the public eye. Speaking to Pittsburg Post-Gazette, Ben confirmed that he was planning to marry Ashley a couple of months later in June.

However, the NFL star was surprised by the sheer attention his personal life was receiving. He said:

"I was surprised at how much media attention it was getting — it’s just an engagement. I never expected it to be on the front pages of all the papers and websites."

"There was speculation what our invitations would look like and who is coming! It almost seemed surreal, it was like a movie or something, it was weird."

Roethlisberger further went on to talk about protecting Ashley from the public eye and why it was so crucial to him.

"I try to protect her as much as I can. People have gone to her parents’ house and have been doing some things. That bothers me a little bit because it’s what I do for a living, I have to deal with it, but her parents and her, that’s not what they have to do."

Ben continued, he understands that a little bit of it is expected but he still goes lengths protecting the people he loves which includes his family, sister, uncle, aunts, grandparents and now Ashley.

Roethlisberger revealed the reason he is so protective is, he does not want her to be under scrutiny over every little thing she does.

No doubt Ben is an amazing person as much as he is a loving husband and a brilliant father! 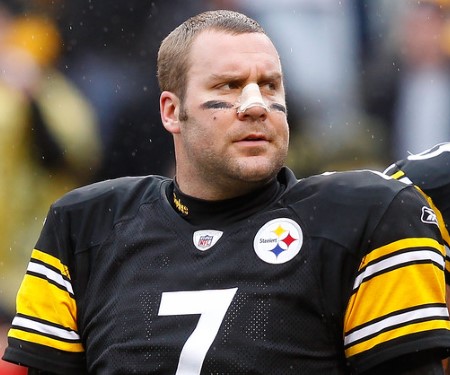