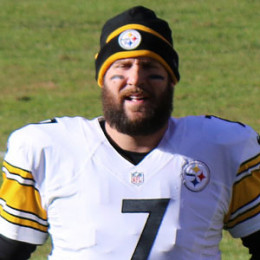 Ben Roethlisberger is an American football quarterback playing for the Pittsburg Steelers of the National Football League (NFL). Five-time winner of Pro Bowl Award Ben is a Super Bowl-winning quarterback and the most efficient passers. Roethlisberger is a married man. He tied the knot with his sweetheart Ashley on July 23, 2011.

Ben Roethlisberger was born Benjamin Todd Roethlisberger on March 2, 1982. He was raised by his father Kenneth Todd Ken Ben and mother Ida Jane in Lima, Ohio.

Roethlisberger grew up with his sister Carlee Roethlisberger, a basketball player playing for the University of Oklahoma. After completing his high school, he enrolled at Miami University for his graduation. Ben had a keen interest in football from the very early age. He used to play football when he was in school and University.

Making his interest his career Ben started playing professionally for Steelers in 2004 NFL Draft. He signed his first contract with Pittsburgh Steelers for six years. He was a MAC offensive Player of the Year 2003 and NFL Offensive Rookie of the Year in 2004. He played his first pre-season NFL game in 2006.

In 2007, Roethlisberger received Pro Bowl Award. He has earned the same award four times till date. He then played in an array of games leading the team to win most of the matches.

Besides football, he is actively involved in social work. He is the founder of a foundation that supports police and fire departments in the US.

The 35-year-old player Ben is a married man. He married his longtime girlfriend Ashley Harlan on July 23, 2011. Ashley is an assistant physician as well as the softball player at St. Francis University.

As one of the best football player Roethlisberger earned quite a fortune. He has accumulated an estimated net worth of $ 70 million with the hefty annual salary of $21, 850,000.

Ashley is the lovely wife of football player Ben Roethlisberger. The couple had been married for almost six years now.

Baylee Marie is the only daughter of Ben Roethlisberger with his wife Ashley. She was born in the year 2014.

Bodie Roethlisberger is the youngest son of Ben and his wife Ashley. He was born in the year 2016.