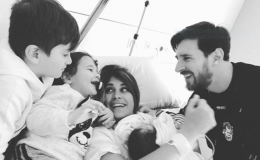 Barcelona star Lionel Messi missed the game against Malaga FC as he had to be with his wife who delivered the couple's third son, Ciro.

It was a good day for Argentine forward, Lionel Messi as he became a father for the third time. Spanish club FC Barcelona had stated yesterday their star player won't be playing against Malaga FC in the upcoming fixture.

According to the club, it was a personal reason for him and later the same night, Leo announced he welcomed a baby boy along with his wife, Antonella Roccuzzo. 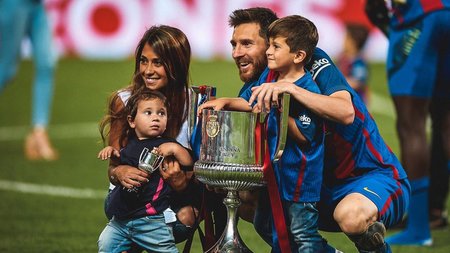 Lionel Messi along with his wife, Antonella and two sons, Thiago and Mateo
Source: The 18

When Barca publicly announced that Messi won't be traveling to La Rosaleda with his team-mates. Though the Liga BBVA club didn't miss his presence as they won comfortably with final score 2-0, thanks to the goals from Luis Suárez and Philippe Coutinho.

As soon as Leo's wife successfully delivered their third boy, Messi took to Instagram to reveal the good news to his 88.3 million fans. And as expected the whole internet was blown away by the news.

Messi shared a picture of his new baby boy.

The couple had already decided on the name of their son. They named him Ciro. In the picture, Ciro's small hand is holding his father's finger and Messi captioned it,

"Welcome Ciro! Thank God everything went perfect. Mom and he are very well. We are super happy."

This is the third child for Messi and his childhood love and now wife, Antonella. The couple became parents for the first time back on November 2, 2012, when they welcomed Thiago.

They announced the birth of their second son, Mateo on September 11, 2015. Both Leo and his wife Antonella are childhood sweethearts and after decades of being together they got married last year.

In October 2017, Messi announced that he and his are expecting their third child. We once again congratulate the Five times Ballon d'Or Winner and pray for his son's good health.