Home Article Lionel Messi Married his Longtime Girlfriend and Mother of his Two Children: Know about their Wedding and Guest Lists

Lionel Messi Married his Longtime Girlfriend and Mother of his Two Children: Know about their Wedding and Guest Lists 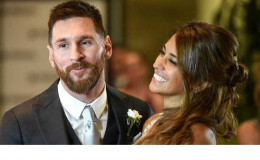 Lionel Messi is blessed to get his longtime girlfriend Antonella Roccuzzo as a lawful wife on 30th June. The couple is parents of two and is very happy as a family.

After several years of relationship and welcoming two children to the world, Barcelona star Lionel Messi and girlfriend Antonella Roccuzzo tied the knot.

Yes!!! the couple married in a grand event in Rosario with some of the best-known celebrities.

The Lavishing wedding of Lionel Messi and Antonella Roccuzzo

Lionel shared a playful kiss with his bride Antonella on the red carpet after accepting each other as lawful husband and wife. 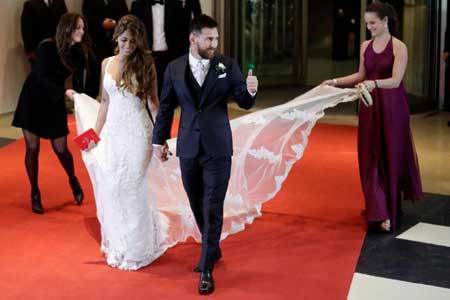 Messi gave a thumbs up after marrying his childhood sweetheart Antonella, Source: The Sun

He looked very happy and proud as he walked hand-in-hand with his new wife. 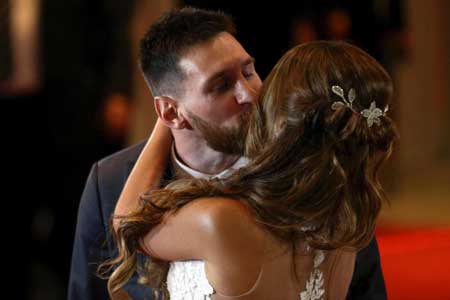 The couple share a kiss in the wedding ceremony, Source: The Sun

The 29-year-old bride wore a beautiful attire designed by Rosa Clara, a Barcelona-based designer. Her dress was revealed in front of the media suddenly after the event was over.

She looked so pretty in a long clear-cut white gown with stone embroidery and boat neckline.

The dress was brought to the destination on a private jet from Spain. She is also famous for her work with actress Eva Longoria and Spain's Queen Letizia.

The pair looked over the moon as they took vows to be together forever. Antonella posted an Instagram image showing the wedding rings on the pair.

Guest Invited on the Auspicious Occasion

Well, if Messi is getting married then there is no doubt that we will see many A-list stars at the event.

Lionel arrived with his Barcelona team-mate Neymar and Dani Alves at the ceremony. The star enjoyed the very occasion with over 250 friends and family.

A huge crowd gathered at the local airport to fetch some of the famous guests. 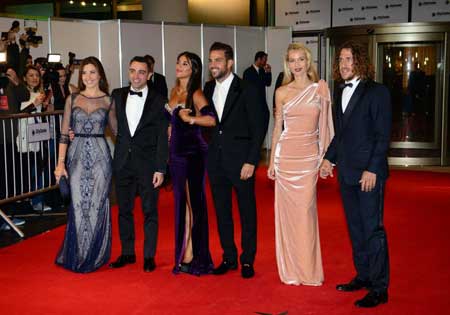 Xavi, Cesc Fabregas, and Carles Puyol posing for a photo shoot on red carpet with their better halves, Source: The Sun

You can see some of the breathtaking clips of the occasion over here:

Luis Suarez and Gerard Pique with his wife, Colombian pop-star Shakira reached in the party in a private jet. 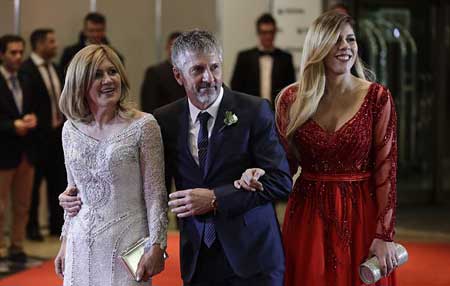 As per the report by Clarin, the football legend didn't invite any of his recent coaches including the very popular Pep Guardiola. He is currently residing at Manchester City.

Some other football legends like Diego Maradona was also skipped from the guest list, according to the local press.

More or less 150 journalists got permission to enter a specific press area but according to the organizers, they were not fully accessed to the scene.

Messi met his partner when he was just five years of age. Roccuzzo is actually the cousin of his best friend, Lucas Scaglia.

They stayed in touch with each other even after he left to play soccer in Spain at 13. It is said that the couple commenced their romantic relationship in the late 2000s.

Like a dramatic movie, Lionel fell quickly for his childhood love. Messi saw her for the very first time while he with his friend were playing Playstation. The same moment he knew that she is the one he wanted to be with the entire life.

They chose Rosario to marry as they spent their childhood and grew up together over there.

The Couple with Two Adorable Children

The duo who have recently been husband and wife is actually the parents of two children.

Lionel welcomed his first son, Thiago on 2 November 2012 following a second son, named in Spanish as Mateo on 11 September 2015 in Barcelona.

Messi repeatedly take leave from his regular training due to his family affairs as he had to take good care of his family.

"Today I am the happiest man in the world, my son was born and thanks to God for this gift!"

The family of four lives in Barcelona and we wish them to a happy and healthy relationship all their life.