Actor Ashton Kutcher and Wife Mila Kunis are seen hanging out with their two children: Happy family of four 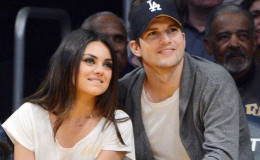 Ashton Kutcher is one of the renowned names in the Hollywood who act in different movies and series. He is happily married to actress Mila Kunis with whom he has two children. Recently he was spotted with his wife and children at California street.

Mostly people recognized him as 'Walden Schmidt', the character which he portrayed on the CBS sitcom 'Two and a Half Men'.

Talking about his personal life, Ashton is happily married to his '70s show co-star 'Mila Kunis' and duo are blessed with two children.

Well, if you are interested in knowing about his personal life more closely than we assure that you came at right section.

Recently on 18th March, Ashton Kutcher and Mila Kunis were spotted with their kids' as they headed to Joan's on Third in Studio City, California.

Mila was carrying her daughter 'Wyatt' at one side of her hip and carried coffee in another hand.

She dressed very casually as she chooses a voluminous white hooded tee with combat pant. Similarly, Ashton looked dashing at his gray T-shirt and denim jeans.

Just a few months ago also they spotted with their younger son 'Dimitri' across Southern California.

They loved to call them a happy and proud parents of their children.

Ashton and Mila with their son, Source: Daily mail

Ashton and Mila knew one another from 'That '70s Show' as they both are cast members of the series.

At that time they were just good friends and there wasn't any love thing.

However, in an interview with 'W magazine', Mila told she has a crush on Ashton from starting. She added,

"We all get movie star crushes and I’m marrying mine.”

During working at the show, once it was rumored that they can't tolerate one another and refugee to work together but nobody knows how much truth it contains.

Arm chair Olympians. Go team USA!!! We got your back! Ty for the blazers @ralphlauren #liketolight

Prior marrying Ashton, Kunis decided to never get married but after meeting her love of life she changed her mind.

It was believed that duo started dating since 2012 as they were spotted spending a weekend together in Carpinteria.

In 2014, the couple secretly got engaged.

After a year of engagement, they exchanged vows in a very private ceremony in a presence of their close friends and family members.

Ashton and his wife hide their wedding news until they appeared on 'The Ellen DeGeneres Show' hosted by Ellen on March 2016.

Ashton is explaining his experience of being the father for the first time.

The duo is blessed with two children; 'Wyatt' and 'Dimitri'. In 2014, they welcomed their daughter 'Wyatt' and they changed her name at the last minute. Again in 2016, they blessed with a cute little boy.

In 2014, they welcomed their daughter 'Wyatt' and they changed her name at the last minute. Again in 2016, they blessed with a cute little boy.

Their married life is going in fabulous ways and there isn't any rumors of their divorce or having extra-marital affairs with someone else.

Arm chair Olympians. Go team USA!!! We got your back! Ty for the blazers @ralphlauren #liketolight

From 1998 to 2001, Kutcher dated an actress, January Jones. According to the source, they were not happy with their relationship but they tried really hard to compromise.

However, we all know love can't move with adjustment and in 2001 Kutcher and January Jones also decided to get separated.

Kutcher with his ex-girlfriend 'January Jones', Source: The Huffington post

After 8 years of splitting with Ashton, January told Kutcher didn't encourage her acting in an interview with GQ. She added,

"Ashton was not supportive of my acting, he was like, 'I don't think you're going to be good at this".

After facing a massive break up with January Jones, Ashton jumped into a new relationship with actress 'Ashley Scott'.

They were referred as one of the cutest couples in Hollywood but this cute couple can't take the relationship for a longer period. So,

So, after nine months of being together, they ended their relation.

Ashley and Ashton, Source: US Magazine

Shortly after splitting with Ashley Scott, Ashton met 'Brittany Murphy' on the set of 'Just married' and started dating her.

However, their relationship couldn't last longer than 7 months and in 2003 they officially announced their separation.

According to their close friends, the reason behind their split was differences in their opinions and ideas.

On December 20, 2009, Brittany was found dead in her apartment due to the combination of pneumonia, anemia and multiple drug intoxication.

However, her death was considered as an accidental death.

Before having Mila in his life, Ashton was previously married to 'Demi Moore' on September 24, 2005, but after living together for six years, Moore announced her intention to end the marriage.

Even they lived separately over a year. On December 21, 2012, Kutcher filed for a divorce from Moore in Los Angeles.

Ashton and Demi Moree at a party, Source: Liberty Voice

During their relationship period, it was rumored that couple was getting married but it doesn't contain any reality.

On January 3, 2011, duo ended their relationship on a good note.

"The split was amicable, and they remain, close friends," a spokesperson told to New York Post's Page Six.

In an interview with Mila opened up about her relationship with Culkin she told,

"He was huge because you couldn't walk down the street with him, fans were just screaming... they didn't know how to react. It wasn't a normal response to a celebrity, fans responded in a very abnormal way."

Well, today both Mila Kunis and Ashton are together and happy with their present relationship and we wish all the best for their upcoming projects and happy life.